A boy and his mom, one last time

In his nearly 20-year career the 43-year-old Mexican director Fernando Eimbcke has produced a slim but distinctive and charming body of work, usually with a focus on adolescence. There’s that also in his new Club Sandwich, which shows a single mother of 35, Paloma (María Renée Prudencio) ) and her 15 year- old son Hector (Lucio Giménez Cacho) taking a cheap summer vacation at a nice seaside motel staying off season on a “promotion.” But this time the attention is more on the adult, Paloma, who’s lonely, adores Hector, and knows their idyll as almost-a-couple is about to end when Hector meets the busty 16-year-old Jazmin (Danae Reynaud), whose family is also staying at the motel and the two kids start hanging out. That’s about all that happens: Paloma’s sad realization that Hector and Jazmin are about to have sex and Hector would rather be with the girl than with her. 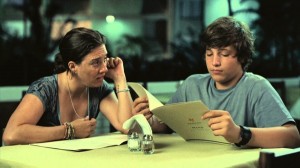 It sounds simple, but Eimbcke has perfect pitch and a keen sense of pace and his minimalism means not a word, glance, twitch of the eye, or a break in tempo fails to communicate its precise meaning, whether droll or heartbraking. What may appear stylized winds up feeling highly realistic in the way each scene captures the essence of things, the heat, the boredom, the games and TV to pass the time, the dips in the pool, the sun block, the conversation that’s so laconic because each situation is so familiar, or so loaded, words are barely necessary.
And there’s the elegant symmetry: at the outset, Hector and Paloma put sun block on each other. They sit next to each other waiting for the lotion to dry. After Jazmin has entered the scene she and Hector will be in the same pose, sitting side by side on a bed waiting for the sun block to dry. Only everything is different.

Laconicism is a thread in Latin American cinema, as are vacations when kids go astray. There’s no talk in Argentinian Lisandro Alonso’s haunting Los Muertos, or much in Mexican Carlos Reygadas’ Silent Light. (NYFF 2007). The abandoned well-off kids in Argentine Celina Murga’s A Week Alone (FCS 2009) go somewhat feral, staging their own suburban gated community Lord of the Flies. Mexican Gerardo Naranjo had fun with a couple of kids who turn against society in his breakout film I’m Gonno Explode (NYFF 2008). The Brazilian Kleber Mendoça Filho’s Neighboring Sounds (ND/NF 2011) works on a larger canvas but also suggests disorder around the corner and feel of unspoken menace. Eimbcke has a drier humor and works in a quieter and lighter key than these others, but his themes sometimes overlap with theirs. 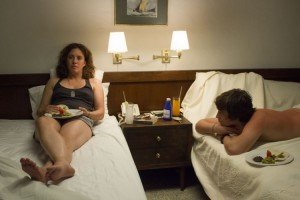 Paloma seeks to invade the little world that now threatens to capsule off Hector and Jazmin. She takes the bull by the horns by inviting herself and Hector to dine with Jazmin, her father, and her step-mother: the dinner conversation is hilariously minimal, restricted to questions like “Do you like school?” (to Jazmin) and “How long have you been married?” (to her stup-mother).

When Jazmin and Hector are sitting next to each other staring forward (the film’s neutral position), Paloma pops into the room and sits in a row next to them. With his genius for using simple means to maximum effect Eimbcke creates an emotional climax with a “punishment” game Paloma, Hector, and Jazmin play after dinner. When Jazmin loses to Paloma, she says the “punishment” is Jazmin’s “leaving.” Then she says it’s joke. When it’s Hectors turn to “punish” Jazmin, and he “condemns” her to do a “sexy dance” — a “punishment” she carries out with panache. Finally Hector gets to “punish” Paloma and he really does — he makes her go out to the hallways looking for a coin-dispensed bag of potato chips. She finds it, and eats the chips alone on the stairs, lonely and sad.

Eimbcke has explained that he drives casting directors nuts, but his demands pay off. To begin with the ages themselves, 35 for the mother, 15 for the son 16 for the girlfriend, are precisely calibrated. María Renée Prudencio and Lucio Giménez Cacho at first look quite alike in the sun by the pool or enjoying their bedroom together; a bad spring in one twin bed even leads them for one night at least to sleep in the same little bed. Lucio Giménez Cacho is on the plump side, but rather pretty, and big. Hence his appearance is deceptive, and can go either way, androgynous boy or attractive young male. Which way he’ll go is shown by his faint mustache and his secret masturbation sessions. Anyway, it’s soon obvious that Jazmin can’t wait to get her hands on him. 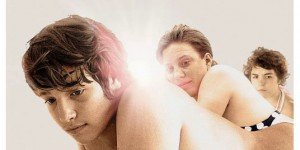 Eimbcke’s features include Duck Season (2004), Lake Tahoe (FCS 2009), which won the FIPRESCI Prize at the Berlin International film festival, and the new Club Sandwich (2013), 87 mins., screened for this review as part of the Emerging Artists program of the New York Film Festival at Lincoln Center. Joanna Hogg of the UK, whose new film is called Exhibition, is the other featured NYFF 2013 “Emerging Artist.”