Written and directed by Eric Red, who also gave cinema audiences the magnificence of The Hitcher in the 1980s, Cohen & Tate is a dark thriller with a great vein of black humour running through it. It also, much like Red’s best film, spends most of its runtime in a car with the main characters.

Roy Scheider and Adam Baldwin play the titular characters, two hitmen who appear at the start of the movie to kill their targets and end up having to drive back to their employer with the one person left alive who witnessed the murder, a young boy named Travis (Harley Cross). Their employer doesn’t want the boy killed. Perhaps he means to do it himself, or perhaps he wants to find out if the boy can somehow realise that he should never tell people about the men who killed his parents. Either way, Cohen and Tate find that their long drive seems even longer with a kid in the back seat who won’t stop commenting on the situation. 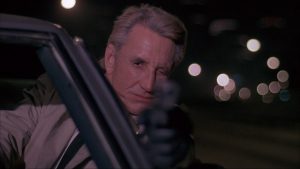 While there are other people onscreen for parts of the movie, this is essentially a three-hander between two adults and a manipulative child. Thankfully, Red has worked hard on the script and picked some great actors to make that sparse premise into a hugely rewarding and entertaining movie. 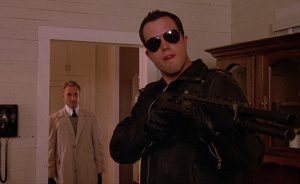 Harley Cross deserves praise for holding his own alongside the two adults. He’s helped by the script, that allows him to develop as things wind towards a, seemingly inevitable, conclusion. What begins as typical, childish chatter soon turns into something more interesting as the character quickly spots how easily he can drive a wedge between the two adults and turn them against one another. Baldwin is all brawn and little brains, at times almost Terminator-like as he strides across the screen in his leather jacket and dispenses destruction with his shotgun. Unsurprisingly, especially to those who know him from more than just the Jaws movies, it’s Scheider who makes the strongest impression. His character, Cohen, is the older and wiser of the two men and it’s most interesting to watch him during the moments when his character is at his coldest. An actor best known for starring opposite a shark gives a performance in which he IS the shark. Look at those dark eyes in the early scenes and tell me it ain’t so. 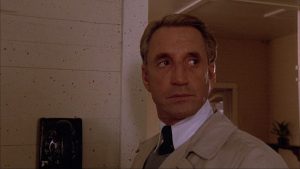 Red does well with his limited resources. The script has one or two mis-steps (the scene with Tate dealing with a tired Cohen being one of them) but, overall, it’s good enough to make up for the large amount of time that viewers spend in a car with three characters. The cinematography, the editing, the score, etc. are all competent enough. No individual aspect is truly great, and I wouldn’t spend too much time insisting that this is some forgotten classic, but everything is there to service the dialogue and character interactions. This may not be unmissable, but it’s well worth your time. 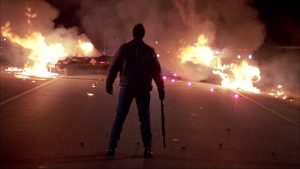