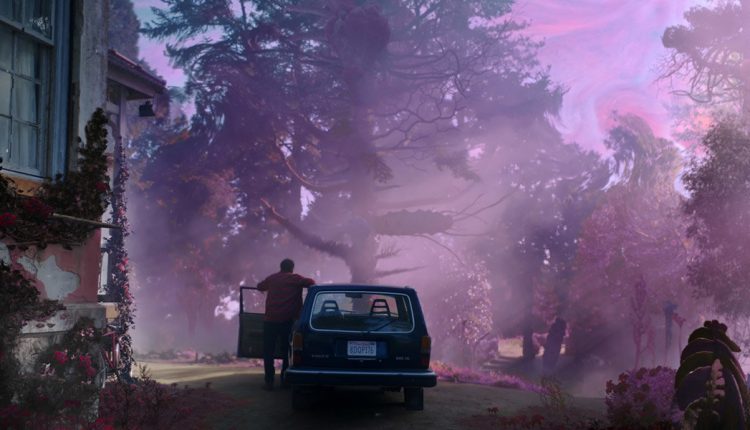 After 2018’s Mandy, Nicolas Cage makes a welcome return to the world of psychedelic horror in Color Out Of Space. A film that proves Lovecraft and Cage is a match made in heaven… or should that be hell?

The Gardner family’s world is turned upside down when a meteorite crashes into the earth surrounding their farm. Slowly the alien rock infects the land, water and minds of everything around it. Leading to a truly horrific conclusion.

Based on an H.P. Lovecraft short story, this film has been a labour of love for writer-director Richard Stanley. In fact, this is his first feature since being fired from the set of the ill-fated The Island Of Dr. Moreau.

Lovecraft was a writer who was able to expertly blend the genres of fantasy, science fiction and horror and Stanley proves to be the perfect director to bring that sense of wonder and terror to the big screen. He takes the central premise of the story and takes it to places that you just don’t expect.

Speaking of taking things to places you don’t expect, Nicolas Cage produces one of his classic off-the-wall performances that is the perfect match for Stanley’s style. From alpaca milking to Cage-Rage, he dials up the crazy as the otherworldly force tightens its grip on the farm.

Similar to Cage’s performance, the film has a gradual evolution from a science fiction into the realm of body horror. It features some of the most gruesome practical effects work seen since The Thing. Yet with the eponymous color from outer space, it also produces some strangely beautiful imagery on screen. In many ways, it could make for a fantastic double-bill with Annihilation.

Color Out Of Space is a lovingly crafted Lovecraft adaptation. It took Richard Stanley over twenty years to return to the big screen but this film was worth the wait. It is simply out of the world… or should that be out of space!

Color Out Of Space is released in UK cinemas on Friday 28th February.