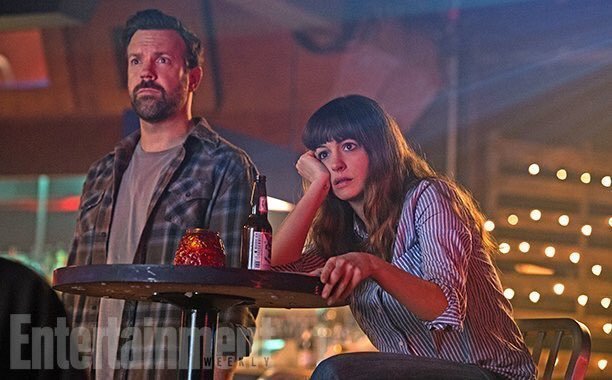 That alcohol can lead to destructive behaviour is hardly an unheralded revelation. With that in mind, even the staunchest Temperance supporter couldn’t have imagined quite the scale of catastrophe brought on by small town binging in Colossal. More than just a great anti-drinking advert, which it certainly is, Nacho Vigalondo’s high concept blend of science fiction, horror and psychological drama is enormously good fun.

As far as concepts go, it’s way out there on the lunacy scale though it takes a little while for this to become clear. First Gloria (Anne Hathaway) has to be kicked out of her partner’s New York apartment for refusing to tame her drink-fuelled party lifestyle. Broke having lost her job as a features writer a year before, she returns to her isolated hometown, taking up residence in the old family house. Any hopes of a fresh start are derailed when she falls in with old pal Oscar (Jason Sudeikis), joining regular late night drinking sessions with him and his two friends (Tim Blake Nelson and Austin Stowell) at Oscar’s half decorated bar.

So far so good. Vigalondo has kicked off a film with plenty of energy and a decent quota of jokes, but little in the way of direction. Except he laid the groundwork in the very opening scene 25 years back in Seoul, South Korea. A young girl drops her doll and when she looks up a giant monster is wandering around. Leaves swirl and she screams in classic horror style. Ignored as a hoax at the time, the monster receives a mixed welcome when Gloria sobers up one day to find it plastered all over the news. The creature, a Godzilla knock-off, has gone rampaging around the South Korean capital killing plenty of people along the way.

Then Colossal really goes out on a limb, for Gloria and the monster seem to have an odd connection. There will be an explanation, there will also be a giant robot, and none of it will make any sense if you stop to think. Luckily, there’s too much fun to waste time picking apart the premise.

Wisely, considering how crazy it all is, Vigalondo makes sure to dish out monster sightings gradually, hooking everyone in to Gloria’s life before it becomes a flat-out monster smackdown. He also has a lot of fun playing with genre tropes. Gloria is frequently shot from below, giving her the appearance of a looming monster. In Seoul the military slips on the trigger finger quickly, bombarding the creature with no clear plan, and watching crowds treat the whole thing like pay-per-view boxing.

There is a drag towards the end and it comes courtesy of Oscar, though it’s not the fault of Sudeikis. He’s the perfect guy to play outwardly charming, inwardly creepy. His comedy persona is built around the slick patter of a con artist and he puts it to good use. It’s the character shift that lets him down as Colossal launches from a frat party monster mash into dull psychological drama. This saps the previously effortless flow, almost grinding the film to a halt. With a flourish though, Vigalondo nails the ending to save the day.

Colossal is a stupid film but its very clever with it. Add in a committed cast, a director who knows his way around genre material, and a big dollop of fun, and it looks like we have a winner.