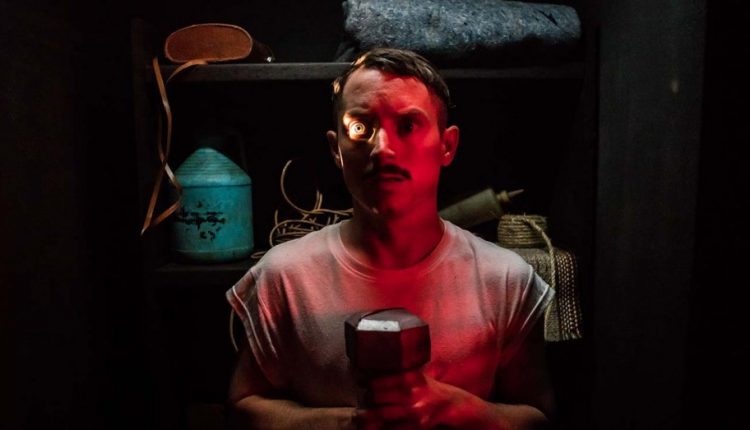 Are you in the mood for a twisted tale of a problematic prodigal son returning to the corrosive clutches of his perverse papa? In his directorial debut, filmmaker Ant Timpson serves up a deliciously demented B-movie bender about a disturbed young man dealing with his bizarre brand of daddy issues in the invitingly strange, hypnotic gruesome thriller Come to Daddy. Beautifully hallucinatory in its grotesque skin, Come to Daddy epitomizes the fine line between a bloody-thirsty B-movie enigma and a slick psychological thriller laced with whimsical weirdness. Whatever the case, Timpson amusingly provides a devilish touch to an itchy fright fable that is gloriously off-the-wall.

Complete with a wild imagination to compliment its grindhouse violence and absurdity, Come to Daddy’s sordid take of the complicated father-son dynamic is an interesting mixture of intrigue, insanity, and intensity that goes down so roughly much like a dry sore throat trying to swallow rusty nails. Timpson and screenwriter Toby Harvard (“The Greasy Strangler”) concoct an oddball odyssey that resonates soundly in its deadpan disillusionment. Undoubtedly deranged and delirious, Come to Daddy has clever pacing for an indie horror show high on the creepy scale. Timpson’s pressed protagonists are resourcefully unhinged enough to pull off an edgy-minded theme that is surprisingly moving in its morbid momentum.

A mysterious letter’s arrival is the basis for the tortured Norval Greenwood (Elijah Wood) to accept an invitation to see his estranged father Gordon (Stephen McHattie). Thankfully, Gordon resides in a decorative oceanside home reminiscent of a UFO-shaped craft sitting on the rocky coastline. Understandably nervous about meeting his old man, Norval is essentially going to stay with a stranger…more so a sperm donor than an actual father. Still, the curiosity overcomes Norval so reuniting with Gordon will certainly be a challenge for the privileged but skeptical soul.

The meet-up between Norval and Gordon is not what one would call a welcomed blessing. Soon, Gordon will reveal his true self–a menacing put-down artist that revels in finding fault with his broken son. Norval is given the acid tongue treatment by his infuriating father. Gordon has a field day picking apart his unstable son. Whether berating Norval’s drinking problem or cussing him out excessively it is clear that Gordon is out to destroy his weak vessel of an offspring. Indeed, Gordon’s “Daddy Dearest” routine is not the least bit appetizing to the tormented young man.

Unfortunately, the wicked Gordon is not the only unpleasant factor looming on Norval’s mind. There is the haunted household holding some mighty deadly secrets that Norval comes across. Plus, the constant worrying persists involving the sinister men hanging around Gordon’s property. Methodically, the chaos builds to a bloody pulp where things spiral out of control. Poor Norval becomes even more of a nervous wreck than ever imagined before. His detachment is profound as it brings out the paranoia that was already embedded in his indelible psyche.

The fragile nature of the disoriented Norval is a marvel to look at because Wood’s frazzled performance as the misguided man-child is a revelation to behold. Wood incorporates an erratic recipe of complexity that is quite compelling within the manufactured madness that Timpson vividly creates. Perhaps pathetic or perceived as sympathetically wounded Wood’s character study of a man bothered by daddy-related demons and his own instilled vulnerability enhances Come to Daddy as darkly winning in its fearful frivolity. As the paternal pest saturated with a diabolical compass, McHattie’s Gordon is simply a fitting element that elevates the disturbing details with convincing naughtiness.

There are instances when the first half of Come to Daddy outmaneuvers the lagging second half of the film where the unevenness in the latter part of the devious thriller undermines the back-and-forth angst-ridden toying that the grating Gordon applies to the pitiful Norval. Still, Timpson musters up enough surreal imagery that feels voraciously inventive that folks would definitely cherish in an impishly frenetic frightener that is as nauseating as it is nuanced in its cockeyed conception.

Thoroughly cringy and calculating, the calling card for Come to Daddy will make gagging to the peculiar whims of this welcoming warped B-movie blister a fine goosebump gem to consider with passing cynicism.