The Beastie Boys No Sleep Till Brooklyn rips up on the soundtrack while Bruce Willis and Tracy Morgan walk toward us in slow-motion during the opening images of Cop Out, Kevin Smith’s latest flick and his first real foray into big budget studio filmmaking. Smith has spent the better part of the last fifteen years stealing the thunder from anyone who would beat him to the punch by railing on himself for his lack of directorial style and talent. Unfortunately, this has already armed critics and audiences alike to shoot holes through anything that he does. That’s the only justification I can come up with for why this movie took so much shit right out of the gate. Cop Out is a totally funny and entertaining popcorn movie.

The basic plot pairs mismatched police officers, Jimmy Monroe and Paul Hodges, together for your standard issued buddy cop formula. It’s revealed that these guys have been partnered up for nine years and in a hilarious opening sequence, we’re taken into an interrogation room where Paul has begged to be allowed to play the “bad cop”. Jimmy watches him through a two-way mirror as he overacts several different scenes from Heat, Training Day & Scarface. Naturally, Kevin gives him some lines from Star Wars to spew off as well. By the end of the scene, the situation has completely derailed into total comedic farce.

As you may have guessed, Jimmy and Paul get the information they need which sets in motion a series of events that will lead to gun fights, car chases and stolen baseball cards. All of it ends up being a pretty fun time.

I’ll come right out and say that the biggest surprise to me in this flick was Tracy Morgan. I’ve never seen an episode of 30 Rock, so my knowledge of Morgan is mostly limited to SNL (of which I was only ever a casual viewer while he was on it). Now, I’ll be honest – all of the marketing material from this movie left me feeling like he was going to be an extremely annoying character. The biggest attribute to this being the “knock-knock” joke seen in the trailer (which actually works much better in context). I’m happy to report, however, that this is certainly not the case. In fact, I think so much of the flick’s strength rests on how funny and charismatic Morgan ends up being. Even for all of his mugging and winking at the camera, the guy is always still likable. I think Kevin Smith has found a kindred comic spirit in Tracy Morgan and I really hope they will continue to work together in subsequent films.

Bruce Willis also gives a very evenhanded performance. I’ve read things claiming he’s phoning in his performance or sleepwalking through the role which seems a little unfair after having seen the film for two reasons. 1.) Willis is the anchor to Tracy Morgan’s over the top performance & 2.) Aside from having some well timed comedic moments himself, he also handles some dramatic weight like the pro that he is (one scene that comes to mind is a very sweet moment where he explains his whole predicament with his daughter to a character named Gabrielle, who doesn’t speak or understand English). 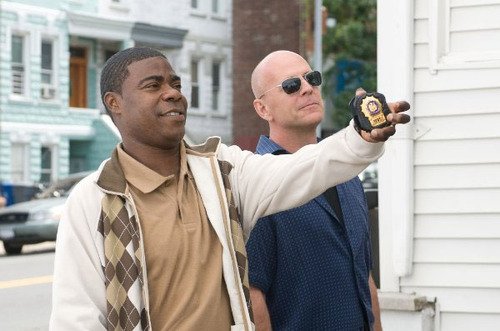 All of the performances, in fact, are very good here. Kevin Pollack and Adam Brody do well as two investigators who love to break Paul and Jimmy’s balls. Sean William Scott steals scenes as an irritating, parkor-skilled burglar who has a proclivity to bowel evacuations in the homes that he robs. Even Jason Lee shows up as the smug, well-to-do, new husband of Willis’ former wife who wants nothing more than to humiliate Jimmy by providing his daughter with a wedding he knows only he can afford.

This film marks the first time Kevin Smith has ever directed a movie that he didn’t write, although while watching it almost seems easy to forget that. From the witty banter to the signature Smith-staples (minor Catholic undertones, baseball cards = comic books?) this still feels like a Kevin Smith movie. With the exception of one scene that feels a little too “loose”, all of the action sequences are competently handled. The flick looks a lot less stagy than some of Smith’s previous films with much more hand-held camera work and far less two-shots with people lined up against a wall talking to each other. You can definitely feel that Kevin is growing as a visual storyteller.

Obviously, Cop Out is by no means perfect. It feels about 10-15 minutes longer than it needs to be and given the fact that it’s a movie operating within a formula, there is a general predictability to it. You never really feel that the good guys are in any real danger. But what counts is that the flick is funny, and it is. Funnier than I expected. Here, Kevin has proved that he can go out and make a totally serviceable studio film. Let’s hope that he doesn’t forget that what made him significant as a filmmaker was the fact that he was an unconventional voice in cinema (even with the bad language and sex talk aside). I really hope he’ll take all that he’s learned here and bring it over to his long-awaited indie horror flick Red State, which seems like the most interesting and best possible 180-degree move he could make with his career.

Regardless, you should still see a couple of dicks in Cop Out – because the movie itself doesn’t. 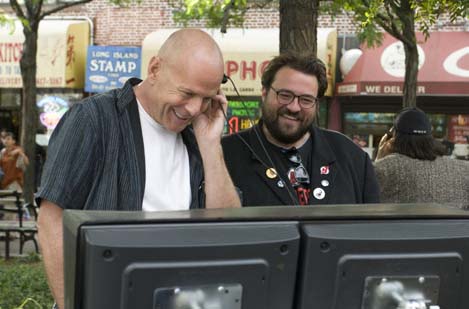