The seldom-adapted play Coriolanus, in the recent cinematic production by Ralph Fiennes, is a rare treat for those of us who enjoy screen adaptations of the Bard’s works. Here, Shakespeare’s Roman tragedy has been updated to a current-day “place calling itself Rome,” with shooting (that is to say, filming) taking place in Serbia and Montenegro. Fiennes directs and stars, and is just the man for the job. Flanking him is Gerard Butler as a perfect Aufidius, and it is flat-out impossible to imagine anyone alive who is better suited for the role of Coriolanus’ draconian mother, Volumnia, than Vanessa Redgrave, who indeed plays the part with stunning power and resolve. Coriolanus is one of those plays which, like Titus Andronicus, is so aggressively dramatic and trembling with the characters’ rage that all the doom and gloom become difficult to take seriously, and yet it is imperative that you do, or the play won’t work; the poetry won’t be done justice. In Fiennes’ film, the drama hits the right notes indeed, helped by excellent actors who are wise to the intensity that this play demands from them.

The basic story concerns a Roman nobleman warlord, Caius Martius, who loves only his mother more than he loves war – not to mention himself, and his arch-enemy-slash-ally Tullus Aufidius, warlord of the neighboring Volscians. The people of Rome have had about enough of war, and they’re giving Martius a hard time about diverse liberties that they feel he should grant them, or not take from them. He, in turn, has nothing but scorn and slight regard for them, neglecting no opportunity to berate and scold them for their fickleness. After a great victory over the Volscian city of Corioles (during which battle one of the strongest scenes in the film takes place; wordlessly, Martius accepts an offered water bottle from a poor citizen he holds at gun-point – a version of a story reported by a messenger in the original play), earning Martius the nickname Coriolanus, he is elected Roman consul. But almost immediately the people, very ficklely, realize that some of his election comments in fact amounted to mockery, and banish him. Coriolanus then joins the Volscians and together they return to conquer Rome. Coriolanus is by then so hardened and one-track-minded that he will hear no pleas for peace – he will take the city “like an osprey takes a fish: by sovereignty of nature” (perhaps the most memorable line in the play) – but finally his mother, Volumnia, delivers a long speech which ends up getting to him, resulting in peace without bloodshed. As he leaves Rome to rejoin the Volscians, Aufidius, who feels betrayed, has Coriolanus killed. Fade to black. 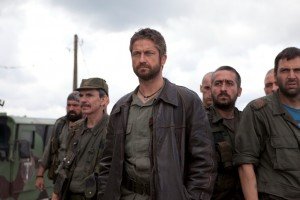 The film does not use Shakespeare’s full text, which is understandable (it would, for one thing, have made the movie an hour longer), but nonetheless a bit dismaying to a purist like myself. More dismaying is the fact that a large number of Shakespeare’s words and sentences are replaced with more modern terms by screenwriter John Logan. And while the meaning of the words may therefore be more immediately apparent to a modern audience – who indeed wouldn’t know that “made new head” means “assembled another army” – there is no detectable improvement in poetic or literary effect. The structure of the play has also been simplified a great deal; some lines are spoken out of their textual context, fluttering strangely and lonesomely in the air. Perhaps the severest victim of revision is the end scene, from which Aufidius’ closing lines have been cut. Aufidius’ dialogue throughout the film has generally been decimated. The film basically shows us Aufidius as a simple, vengeful war-monger rather than what he is in the original play: a complex and pensive figure with far-reaching ambitions, who saw fit to use a simple-minded bulldog like Coriolanus for his own longer-term ends.

At the end of the day, though, one cannot rage too much over these changes; the original play is extremely hard to grapple with, and for the sake of both producers and audiences it makes a lot of sense to cut off the odd heel and toe here and there to make it more manageable. The one thing of substance I felt was missing in order to make it a great film was a better visual dimension; more to look at. War is ugly, to be sure, but to help enthrall the viewer I would have appreciated a more exotic environment. It needn’t have required much more than a few interesting instances of architecture, painting or costuming; a little something extra to give the film a unique and memorable style and visual statement of its own. I would have preferred the setting to be slightly more unusual and slightly less bleak. Still, even as it is, this adaptation is indisputably a competent, worthy and valiant effort, and a good modern version of the play. I rate it at the same level – 8 stars out of 10 – as the 1984 traditional (and complete) BBC TV version, which also has its imperfections.

But, as usual with Shakespeare, all is never said and done. Coriolanus is a puzzling play. Is it fair to call it one of Shakespeare’s worst? It is. But even bad Shakespeare commands our attention. One could be forgiven for asking: is Coriolanus particularly poetic? Well, strangely, it is not. There are almost no impressively quotable statements in it. Did Shakespeare have an off month when he wrote it? I don’t think so; I think it is deliberate and relates to the theme and character. The play itself explains that Coriolanus is “ill school’d / In bolted language” (in the film, John Logan substitutes “bolted” for “graceful,” which does get the point across better for the audience – but defeats what is probably Shakespeare’s deliberately unpoetic point), and as the protagonist goes, so goes the play. Shakespeare, in this play, seems to have gone to quite creative extremes to stop himself from being poetic, and I think this point should, ideally, be thematized in a truly outstanding production of the play. 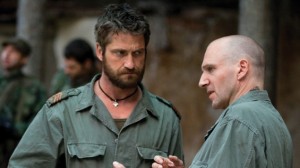 Shakespeare as I, with the eyes of a historian, read his works, was extraordinarily concerned with the transition of human civilization from a war-like state and to a state of peace. To him, the state of peace is defined by courtly love being possible and beginning to flourish. He examines in Antony and Cleopatra and in Troilus and Cressida why war makes courtly love impossible in early history. He shows in Much Ado About Nothing how peace turns the soldier into a lover. In Othello, following the last great battle against the Turks, marking the transition from the age of war to the age of diplomacy, the courtly lover Michael Cassio becomes the new guy to praise as well as envy, and rival to the old soldier, Othello. For Shakespeare, it is all a question of being ruled by passion or by reason. War is a good and honorable thing at a certain stage in history (witness Henry V, among others), but when enough people become rational enough to be “no passion’s slave,” which is what Shakespeare (like Hamlet) admires the most, tactics of the intellect replace those of the sword-arm.

Coriolanus is a human sword; he even asks his men to use him as such. His raging passions drip from him like sweat; he finds glory only in mayhem and destruction, and anyone who loves peace is a worthless coward who deserves hanging. He represents war, or the old aristocratic class who clings to the antique and antiquated values of using war to accrue honor, refusing to acknowledge that civilization/urbanization is progressing in directions where peace and social organization (like feeding the masses) are much more important than obsolete forms of martial honor.

This is what Coriolanus chronicles: an era of history where a war-mongering aristocracy can no longer find popular support, because people now have a wide range of needs and interests that depend entirely on peace. It has often been said that Shakespeare really wrote about the emerging civil society of his own era, and in the case of Coriolanus that is certainly more true than to see the play as being about ancient Rome. The common virtue of Shakespeare’s play and Fiennes’ film is that they both apply exceedingly well to the world we live in now. We still have war-mongering politicos, both in the developed and the developing world, who are deaf to many popular outcries about feeding the poor and who would rather threaten weaker cultures into submission than help them join an increasingly peaceful world community. For as long as this continues, Coriolanus will remain relevant.

The Coriolanus Blu-ray has a commentary track by director/star Ralph Fiennes, but it is a bit laconic and not particularly informative. There are also interviews with the cast, and a behind-the-scenes featurette. Overall a good, if not a stellar, package.