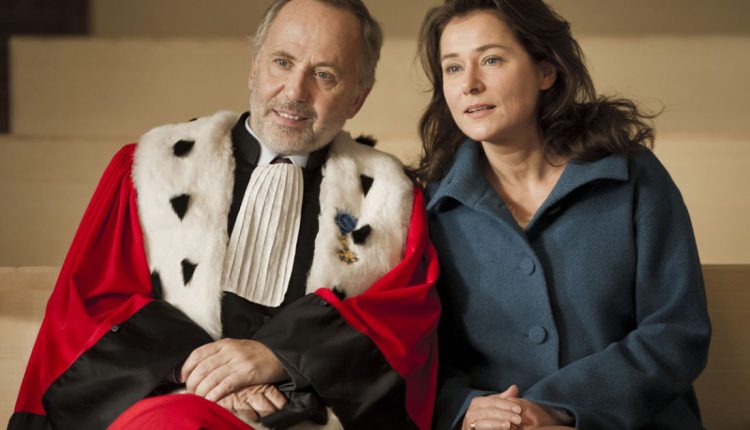 Love in the most unromantic of circumstances, that’s what Christian Vincent serves up in Courted. Set in and around a French criminal court, he takes great pains to show us the roundabout machinations of this venerable institution of justice, while also introducing light into the world of its misanthropic king. An uneven mix of bureaucracy and romance is lifted by a methodical approach to court proceedings, and the understated charms of Sidse Babett Knudsen and Fabrice Luchini.

Luchini is Court President Racine, the overlord of a small empire. He’s not much liked by colleagues who warn others of his mean-streak, and gossip idly about his nightly adventures. He’s a ten-up according to one, the kind of judge who sees a decade as a minor sentence. Ailing from the flu and permanently dragging around a bag on wheels and a bright red scarf, he can’t stand attempts by officials to jolly up to him. When anyone tries to tempt him into conversation, he normally ignores them.

This ambivalence doesn’t carry into his work where, aside from a delectation for grandstanding, he’s considered an effective administrator. The case before him this time is a hard one. A young man stands accused of kicking his seven-month old baby to death. He confessed in the Police Station but now recants. The first half of Vincent’s film is entirely concerned with proceedings. With Wiseman-esque subtlety, Courted captures the daily flow of activity in the courtroom. Jurors are selected, prosecution and defence introduced, statements presented and witnesses brought out.

Lengthy scenes simply follow the in-court investigation, or the deliberations of jury members in the many recesses Racine seems to call. Some of the interviews are funny – a couple bickering over the layout of their flat – others are heartfelt or confused. It’s an absorbing process, made all the more so by the little touches. The defendant often forgets to stand when Racine enters. At the bottom of the shot, a Police officer can be seen tapping him on the shoulder. Two jurors have a bet over the footwear of another colleague, a young man who insists on wearing combat boots to a trial about a child being kicked to death by combat boots.

The court case recedes from view in the second half as Sidse Babett Knudsen’s juror comes to the fore. The moment she first appears, Racine can’t take his eyes off her. Who can with Knudsen’s smile, one of the most addictive in cinema. Infectiously confident and elegantly dressed, Knudsen is the star attraction. As he courts her (how pleased they must have been with the English title – the original is L’hermine), the focus switches to their clandestine meet-ups after work. It’s not against the rules, nor is it advisable. Nor does much happen for that matter. They talk and talk until he leaves her with a final plea.

Romance comes at a cost, removing the trial from view. Both segments work in isolation, both feel rushed when Vincent combines them, leaving Courted lost in its intentions. As for the final verdict, getting lost with Knudsen and Luchini is ultimately no bad thing.