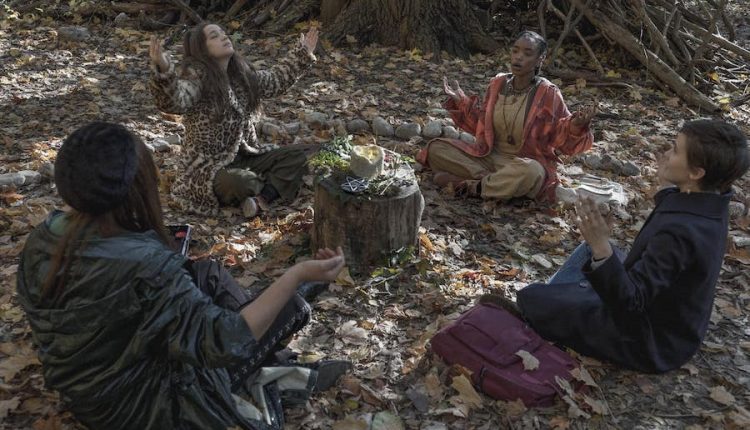 When The Craft was released in 1996, it became a surprise box office hit. Over 20 years since its release, it has been labelled as a ‘cult classic’. Now, American actress-filmmaker Zoe Lister-Jones is taking on a contemporary take on The Craft – just in time for Halloween.

Starring Cailee Spaeny, Michelle Monaghan and David Duchovny, The Craft: Legacy focuses on Lily (Spaeny), who – along with mother Eunice (Monaghan) – moves in with Eunice’s boyfriend Adam (Duchovny) and his three sons. When Lily suffers an embarrassment at school, three aspiring young witches quickly befriend her as they believe she will complete their coven.

It is fair to say that revisiting The Craft is a gamble. Starring Neve Campbell and Fairuza Balk, it became the alternative 1990s teen film for rebellious women everywhere. Therefore, The Craft: Legacy has to bring something relatable that honours the themes of the original.

First of all, Lister-Jones’ vision has the feel of a typical teen film. We have our insecure protagonist, who finds herself struggling with her new home and school. But things change when classmate Timmy (Nicholas Galitzine) mocks Lily once too often and she is embraced by three eclectic young women.

Upon discovering Lily’s powers, the bubbly Gracie (Gideon Adlon), sassy Tabby (Lovie Simone) and wise Lourdes (Zoey Luna) explore the strength of the coven. As they enthuse about their growing powers, they create a pillar of support that does not delve into cattiness. While the 1996 film had an antagonistic tone, this version promotes the power of sisterhood amid its typically toxic high school culture.

Although they are enthusiastic about their powers, they are similarly aware that there are consequences with their spells. When a member acts recklessly, the coven realises that they’ve crossed a line and jointly choose to act wisely, not their conceit. This highlights a maturity that was missing in the original, as well as the all-too-familiar lesson about power and responsibility.

However, The Craft: Legacy‘s focus on feminism affects the lack of development in its male characters. Adam comes across as chauvinistic, his sons feel redundant and Timmy is the stereotypical school asshole. Although Lister-Jones tries to balance out the narrative with Timmy’s character development, the story ultimately pushes its men aside. Unfortunately, this also leads to a rushed climax and plot holes that question the need for certain characters.

Needless to say, The Craft: Legacy is all about its leading ladies. Thanks to the relatable screenplay, they all offer different personalities with individual charm and humour. In addition, Monaghan, Galitzine and Duchovny’s subtle performances bring extra levels to Lily’s story that keeps her in the foreground.

Behind the camera, Lister-Jones makes witchcraft cool again. Her story brings a clever and bold direction stresses its themes of inclusion, friendship and community. Unfortunately, she downplays its horror so it is not as terrifying as other recent Blumhouse Productions, which subsequently brings down its supernatural-horror elements.

Overall, The Craft: Legacy is not as groundbreaking as the 1996 film but offers a strong message, reminding audiences that the world is not filled with malice.

The Craft: Legacy will only be in cinemas from October 28.