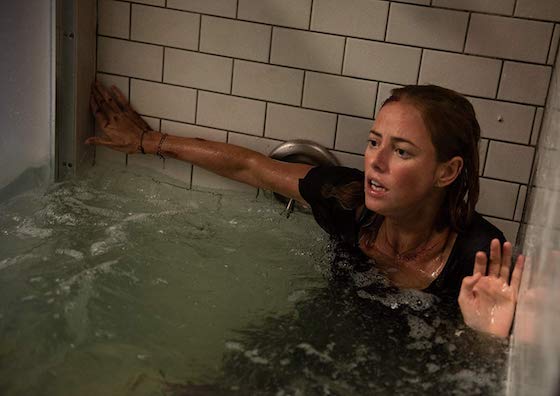 The Sunshine State is known for a lot of things that come to mind: the Disney experience, gorgeous heated weather, booming tourism, the exquisite beaches, delicious oranges, the melting pot of a diverse population, etc. However, co-writer/director Alexandre Aja reminds us of the not-so-great elements that constitute Florida’s makeup as well and puts it to thrilling use in the hearty and hedonistic horror showcase Crawl. Of course, Aja utilizes the hideous wrath of Mother Nature and the region’s known predators (alligators) to highlight the calculating conflict in this devilish disaster-based drama. Creepily engaging and fixating, this relentlessly jittery water-logged B-movie spectacle makes Crawl every bit its wrenching worth in gory gumption.

Indeed, there is nothing like a jolting summertime creature creeper to invade the box office as Crawl certainly fits the bill as a natural disaster flick that registers with twitchy-minded escapism. Aja and fellow screenwriters Michael Rasmussen and Shawn Rasmussen (“The Inhabitants”) muster up a confining and claustrophobic critter caper that effectively works on the exposed nervous system. The hysterical usage of a Category 5 hurricane overwhelming regional Florida where the deadly alligators can easily feast on human appetizers makes for some mighty treacherous optics in the fear factor department. Aja, no stranger to jumpy frightfests with such daring ditties as The Hills Have Eyes remake and the campy but corrosive Piranha 3-D, delves into the psychological anxieties of a father-daughter tandem trying to cope with the chaotic unraveling of their notoriously soaking surroundings.

Crawl certainly does not reinvent the wheel in terms of conveying a ground-breaking creature feature wrapped within an overbearing stormy saga of confusion and despair. Nevertheless, it is a notable genre film that is as playful as it is preposterous. This unflinching account of weather-related woes concerns Kaya Scodelario (“The Maze Runner”) as Haley Keller, a concerned daughter out to search for her missing father Dave (Barry Pepper) at the urging of her equally concerned sister (Morfydd Clark) during a major hurricane threatening to cripple the territory. No one has heard from Dave and the deadly weather conditions make it even more sinister in wondering what has become of him.

Sadly, college student Haley–an avid swimmer at school–has been estranged from her father for quite some time. Still, this does not prevent her from heading over to Dave’s house to check on him during the heavy raining. Upon arrival, Haley discovers that Dave is both seriously injured and trapped beneath his home. Obviously, this presents a severe problem considering the following factors: a.) the massive flooding in the jeopardized house is enough to drown both Haley and Dave without much effort and b.) the infestation of sizable alligators are crawling about and if the Kellers are not careful in avoiding them perhaps the gross gators may make them into a pair of human boots or convenient tasty snacks in retaliation. The constant uphill battle to survive the jeopardized house filled with roaming ravenous reptiles and drenching rollicking rainfall is an indescribable stressful dilemma that haunts the father-daughter duo at every haunting turn.

To say that Crawl packs a gruesome punch would be an understatement of the immediate moment. Sure, this gaudy gorefest is gloriously absurd but one ends up going with the ferocious flow as the involvement of sudden danger and destruction takes center stage. Aja methodically administers the cold-blooded close calls regarding Haley and Dave as homebound bait for alligator munching. The surreal feeling of witnessing these steely-jawed scaly monsters wade in the tricky waters to torment our unprotected protagonists is eerily received with convincing chills. Some of the folks not so lucky to duck and dodge these hardcore predatory pests are reduced to the mincemeat of loose limbs, chopped body parts, and bloody flesh parts aimlessly floating in the wicked waters. It is both gruesome and oddly fascinating to watch.

Visually arresting, Crawl’s production value is impressively polished. The special effects are eye-popping and the storming scenes are quite believable and colorfully boisterous. The alligators are undeniably frightening and manage to add the element of surprise with each vicious attack that hits or misses. Scodelario’s Haley is a capable horror heroine caught up in this creature-made carnage. The plot is rather basic but it is also riddled with the guilty pleasure perversion of debauchery that is to be applauded in this beastly B-movie freak show.

The bouncy bloodshed in Crawl should inspire those to run rather than walk to a helping of old-fashioned horror-induced hedonism at its celebrated naughtiness.