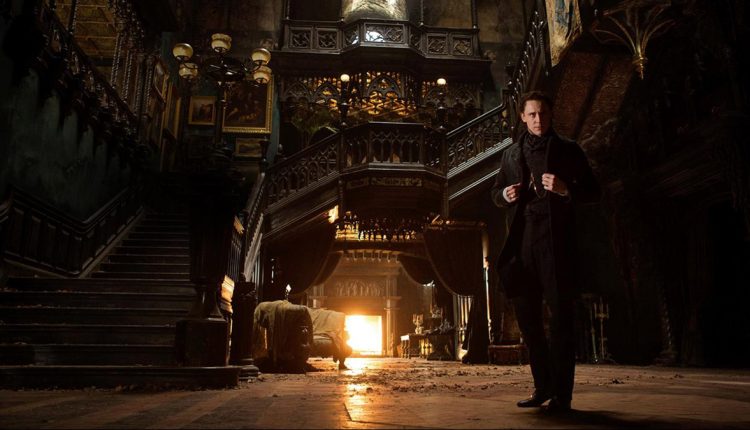 As a director whose imagination, creative eye and affinity to gothic horror initially captured the hearts of film fans, Guillermo del Toro took a strange turn with 2013’s Pacific Rim, a film heavily reliant on CGI with a concept that is more sci-if than gothic. Now, he has returned to his roots in his latest film.

Crimson Peak is about a young woman, Edith (Mia Wasikowska), who has aspirations of being a writer. She meets and quickly falls in love with Sir Thomas Sharpe (Tom Hiddleston), a young inventor. After a family tragedy, she decides to marry Sharpe and move into his house in England, to live with him and his sister Lucille (Jessica Chastain). But shortly after her arrival, Edith realises that there are hidden secrets behind her new home, as well as her new husband.

The film starts off well; a strong, intelligent woman who is independent in terms of identity and career, but this fades fairly quickly. As the film transfers its action from the US to England, the pacing slows down dramatically and the plot takes too long to reach its conclusion, making the second act of the film feel tedious.

This may be due to the small core cast of Wasikowska, Hiddleston and Chastain. There is only so much that del Toro and co-screenwriter Matthew Robbins can create in order to form a complex enough story to accommodate the 118min running time, but essentially, Crimson Peak needs either a shorter running time or a more developed plot.

Having said that, the theme of strong female characters is a notable addition. Even though Edith loses her identity after marrying Sharpe, she has the strength not to cower at the first sight of danger and sees the situation through, while the sinister Lucille obviously wears the trousers in the Sharpe household. Both Wasikowska and Chastain are great in their respective roles, with each conveying emotional fragility as their characters are driven by a need to survive.

In comparison, Hiddleston and Charlie Hunnam, who plays Edith’s other love interest Alan McMichael, initially present themselves as intelligent and cultured characters with a sense of morality but end up coming off one-dimensional and occasionally dull.

The production design and costumes are gorgeous throughout the film, and the gothic/horror is mild enough for the most squeamish of viewers. The direction makes the most of the varying spaces and the distinct, contrasting colours, so it is beautiful to watch. It is almost a shame that the story is not developed enough to make a more intriguing tale.

Overall, Crimson Peak is gorgeous to look at, but is ultimately let down by its half-baked plot.

Crimson Peak is out in UK cinemas on Friday 16th October.