Imagine if you were to take one of Shakespeare’s lesser known works and transplant it to modern day America where a drug dealing biker gang and the police are all set to square off. Now add in an 80’s B movie action vibe and mix it with pantomime. What do you have? On paper it’s a recipe for an almighty mess. And in practice that’s just what comes out the oven albeit in a surprisingly enjoyable way if you can stomach watching the Bard dragged into late night movie territory.

Michael Almereyda has history with Shakespeare. A decade ago he adapted Hamlet, also with Ethan Hawke who returns here as Iachimo. Keeping with the original character names, Ed Harris plays King Cymbeline who’s encouraged by his manipulative Queen (Milla Jovovich) to marry his daughter Imogen (Dakota Johnson) to her son Cloten (Anton Yelchin). The problem, as ever, is true love. Cymbeline’s penniless prodigy Posthumus (Penn Badgley) has only gone and married her instead. With Iachimo sowing seeds of discord wherever he goes, and Cymbeline intent on sparring off with the ruling Roman authorities, the stage is set for the usual array of back stabbings, consumption of poison, mistaken identities and rushed proclaimations of death. And a bit of a bloodbath to finish. 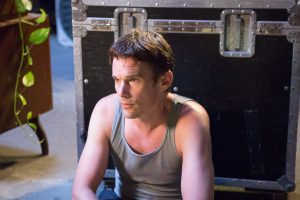 Emotion is an entirely absent concept in this Cymbeline. Scheming comes first. And second and third. As the machinations pick up pace, the level of ridiculousness creeps ever upwards. All of a sudden we’re in the land of comedy violence. Heads fall with a single blow after macho posturing. Poor Imogen takes a nasty (and also very funny) elbow right to the face when attempting to comfort her husband. It’s a strange, but not altogether unappealing way to adapt Shakespeare.

Realistically, there was never going to be space for emotion. The cast have their own problems to distract them. Moving Shakespeare to a contemporary setting and asking them to stick with his original lines always poses a challenge. Some actors simply can’t deliver them with Shakespearean conviction. Generally, they fall into two camps. There’s the uncertain mumblers not able to get to grips with the different cadence required, and the shouters who go for gusto at all costs. Ed Harris strays a little too close to gusto but does a decent job. Hawke and Jovovich manage slimy as John Leguizamo’s Pisanio hits sincere. Others fare less well. Johnson is a solid, if unspectacular presence, Yelchin a mess. The worst offenders are Delroy Lindo as Belarius who only has one register; pompous, and his young charges who sound like they’re at an audition for a school play.

As an attempt to do high tragedy, Cymbeline is a joke. What Almereyda has delivered up instead is a bite-sized chunk of pulp entertainment that’s hard not to enjoy. Did they mean it to turn out this way though? When all the body swaps and double dealings are complete it’s the only mystery remaining.