I have to admit that, despite the acclaim heaped upon it and despite my love for all things featuring Matthew McConaughey lately, I was apprehensive going into my viewing of Dallas Buyers Club. Only knowing that it was based on a true story, and just how little that can mean when it comes to the world of movies, I was worried that this might be one of those scenarios in which a major problem is solved by good ol’, heterosexual, white Americans. You know the kind of movies that I’m on about. I’m not going to list them here. Some of those films are still enjoyable as bits of escapism, and many of them have good moments throughout, but they do everyone a disservice with the many compromises made to pander to as wide a demographic as possible.

Dallas Buyers Club, for the most part, doesn’t quite feel that way. It’s undoubtedly guilty of taking certain liberties with the truth, but it appears that the same can be said of the lead character, Ron Woodroff (McConaughey). And I’d say that the release of the film is timed pretty perfectly, as we all look to move a step or two backwards, with so many people forgetting that HIV is still very much out there and claiming victims, and the extremely ignorant STILL believing that they are safe, just because they’re not homsexual or sharing dirty needles with drug addicts. As Woodroff, and many others have discovered, HIV is an equal opportunities infection. 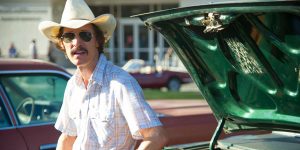 Anyway, let me get to the actual main storyline. Woodroff is a hard-drinking, drug-taking, hooker-using, homophobic cowboy type, with plenty of cursewords and aggression ready to spill out, but also a twinkle in his eyes and his smile. When he’s admitted to hospital after an accident he is told by the two doctors attending to him (played by Denis O’Hare and Jennifer Garner) that he has HIV, and about 30 days left to live. Not willing to believe this, because he firmly believes that the disease only affects gay people, Woodroff storms off and tries to get straight back to his old ways. It soon becomes clear, however, that there IS something very wrong with him, and as he starts to research the disease and medicines available, Woodroff realises that he may need to travel further afield to get the good stuff, pills not FDA-approved that may help in prolonging his lifespan. He’s soon doing what he’s always done best – hustling – to get medication for himself, and others, while he conducts his own research into the best ways to battle the virus.

Dallas Buyers Club works well because of many factors. The direction by Jean-Marc Vallee may not be the sharpest, or overly concerned with showing off any technical prowess, but the cameras are always pointing the right way and no major mistakes are made. The script, by Craig Borten and Melisa Wallack, manages to show Woodroff’s journey by compressing the passage of time and then picking major failures and triumphs to look at in slightly more detail. Typical biopic stuff, in other words, but still very well crafted in its blending of character moments and information being conveyed to the audience.

But it’s the acting that really raises this up a notch or two. McConaughey, who lost a fair bit of weight for the role, excels, underpinning his usual Southern charm with a rawness and crudity that makes Woodroff a consistently interesting watch. His personality changes, as you might expect, throughout the movie, but it only ever seems slightly clumsy. Jared Leto, who also lost weight for his role, gives a good performance as Rayon, a transgender woman who ends up befriending Woodroff and becoming a vital “business partner”. Of course, the casting of Leto in the role, and the fact that the role was one made up to highlight the homophobia of Woodroff, is a thorny issue. There were different ways to approach this aspect of the story, and indeed this character, but that doesn’t detract from the fact that Leto gives a very good performance, albeit one that I don’t view as particularly award-worthy. The weakest person onscreen is Jennifer Garner, but she’s stuck with the worst characterisation (e.g. oh, she can swear back at Woodroff because she’s tough, and she wears glasses because she’s smart but . . . . . . . . . she can take them off, of course, for a date and look even prettier). Denis O’Hare is as good as ever, Steve Zahn does well in a small role, and so does Griffin Dunne.

Dallas Buyers Club tells, I think, a story well worth telling. It’s interesting, it will get a variety of reactions from people, and it’s a very good movie. It’s not perfect, and there are people who may take more umbrage with it than I did, but it seems to be well-intentioned, and a lot of the negatives are completely forgotten as you watch McConaughey continue his journey through the best phase of his acting career.

Dallas Buyers Club is in cinemas nationwide from 7th February.