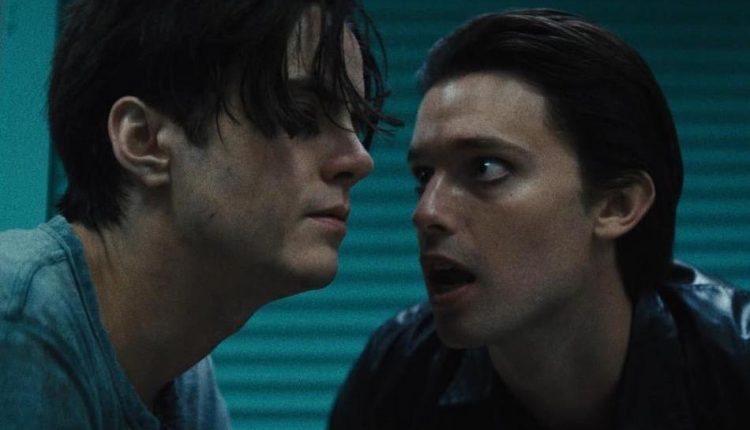 Based on the novel In This Way I Was Saved by Brian DeLeeuw, the film follows troubled Luke (Miles Robbins) who suffers a violent family trauma. To help him cope, he resurrects his childhood imaginary friend “Daniel” (Patrick Schwarzenegger), not realising how dangerous he really is.

Having been “locked away” as a child, the grown-up Daniel initially gives the troubled, timid Luke a timely confidence boost. For instance, turning up to exams with the answers written on his body a la Memento. Or providing Cyrano De Bergerac-esque words to help woo his romantic conquests.

Daniel oozes charm, confidence and sex appeal. It is easy to see why Luke is enamoured with him. Just as The Narrator was drawn to Tyler Durden in Fight Club, “All the ways you wish you could be, that’s me”. Patrick Schwarzenegger is the perfect personification of this.

The surname will naturally draw comparisons with his father but it’s undeniably clear that he’s inherited Arnie’s star quality. As a result, the camera is instantly drawn to him and he has a commanding screen presence. Yet with his toned physique and slicked back hair, there is a definite air of Patrick Bateman from American Psycho in his creation. In interviews, Patrick mentioned Nic Cage as an acting inspiration and he exudes the same electric, unpredictable nature as Cage.

When Luke falls for artist Cassie (Sasha Lane, American Honey) and tries to distance himself from Daniel, he finds himself losing control. Therefore he must return to his past to discover Daniel’s origins, linked to a tragic event the day they met.

As Daniel exudes greater influence over Luke, similarly the film also experiences a gradual but welcome tonal shift. Slowly morphing from a character study of a man coping with trauma and mental illness into a dark and twisted horror.

Mortimer conjures up some truly horrifying imagery thanks to a mixture of excellent practical and CGI effects. They are used sparingly to allow for maximum impact and shock when they appear. Importantly, they never betray the story being told. Instead, it feels like a natural progression as Luke’s mental state starts to fracture as reality and nightmare begin to bleed together.

DANIEL ISN’T REAL will be released in UK Cinemas 7th February 2020, and on Blu-ray and Digital HD on 10th February 2020.
For cinemas visit: https://www.ourscreen.com/film/Daniel-Isnt-Real