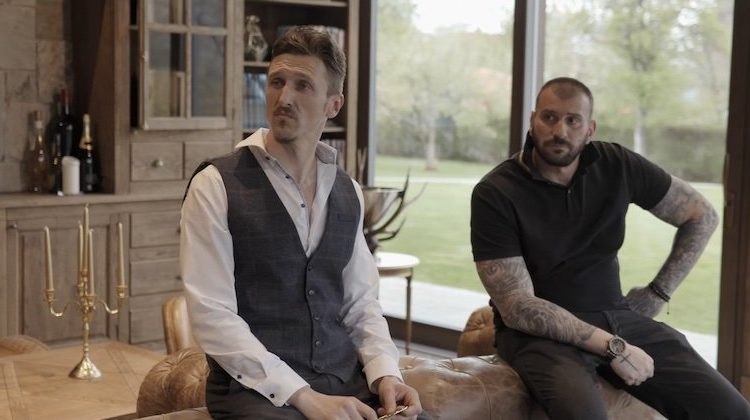 Danny, a middle-aged city councillor and businessman in an unnamed Eastern European town, is to be the subject of a documentary on money laundering – but that’s not Danny’s plan. Instead, he hijacks the documentary for his own ends and leads them down deep into a swamp of violence, corruption, and drugs.

Director Yavor Petkov is keen to make it clear that his debut feature film DANNY. LEGEND. GOD. is not a remake of the 1994 cult classic C’est arrivé près de chez vous (Man Bites Dog), in which a serial killer selfishly co-opts a film crew, but it is a key influence. He also draws upon his personal experience of political corruption in his homeland of Bulgaria, where characters such as Danny (played by the amazing Dimo Alexiev) turn quiet European towns into their personal fiefdom.

Fuelled by cocaine and drunk on his own ego, Danny is handsome and oddly charismatic. He no longer fears any consequences and swaggers about the town like he owns it – probably because he does. The film crew are sucked into a vortex of drugs, alcohol, and cheap sex, watching passively as Danny does whatever he wants – whether that’s simply ignoring the banker doing his best to collect debts Danny owes, or beating his godson’s teacher in public, with the man’s son watching.

Dimo Alexiev is, perversely, a joy to watch – essential given that he’s in front of the camera for almost the entirety of the film’s 106-minute runtime. He’s captured the energy of man permanently on the edge of the abyss, or perhaps already starting to fall into it. He’s simultaneously friendly and mean, generous and spiteful but always devoid of any desire to act in the best interests of the town he’s meant to serve. He’s driven solely by his needs – and utterly terrifying because of that.

Sadly, Alexiev’s note-perfect delivery isn’t enough to make up for the film’s slow pacing and uneven acting from the supporting cast. There also isn’t a lot in terms of plot – no great revelations or climatic events, just the steady unravelling of a man consumed by his misery. The ending will probably divide audiences with some feeling it’s a hollow cop-out and others perhaps seeing it as the perfect end to a horrible man, but possibly true of the film itself.

DANNY. LEGEND. GOD won’t be for everyone and certainly isn’t without its flaws but it is a well-executed debut with an amazing performance from leading man Alexiev.

DANNY. LEGEND. GOD. is now available on Amazon Prime, iTunes and Sky Store in the UK and Ireland.