“You don’t do anything…and you think too much,” retorts one character in Daphne (2017).  Boy, if only the director had heeded those words of wisdom.

What should be a moving, powerful and touching film about a young woman growing up, dealing with the struggles and uncertainty of life merely shows a troubled woman who makes questionable decisions, pushing away the support in her life with no real emotion or development.

The titular Daphne (Emily Beecham) is a thirty-something chef living in the hustle and bustle of London who is quick to judge others yet cannot comprehend her own shortcomings. To her credit, Beecham sets her character superbly – within minutes of on-screen time, you get the total sense of the character; surely, that is also a shortfall – in ‘character study’ films, the character needs to mean something and be worthy of study yet sadly, here, she is merely vaguely likable: One character that will just be pushed aside like a disappointing meal.

Daphne has the potential to be an interesting character: the inner conflict, philosophical debate and outlook on life but ultimately is just seen as a shadow of someone entertaining. The decisions made (drugs, attitude to sex, pushing people away) just irks. They feel totally unsatisfying and create an audience attitude of dislike. The film feels plain and empty. David (Nathaniel Martello-White), a bouncer at the club she gets kicked out of, adds an interesting character finally, however we get very little of his development. Instead David is cast to the side-lights. 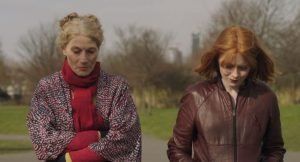 There are moments within the film, such as the shop robbery / stabbing / crime gone wrong which shock and awe the audience – the suddenness while great, jars against the rest of the film.  It is this tragic event which kicks Daphne into realising her life is in limbo – too old to wander aimlessly yet too young to settle; Daphne begins to unravel at the seems.

While the film makes a bold decision to avoid humour like other films including Bridget Jones’ Diary, there are scenes which generate a chuckle – one standout moment would be Daphne’s question, “Will you be my wingman?” while holding a chicken wing drunkenly being one.

Daphne’s confused, lost woman is reminiscent of The Catcher in the Rye’s Holden Caulfield, particularly when seeing the counsellor for the first time. She comes across as awkward, unwilling to share her woes yet puts intelligent comments (as she does when debating love and Freud) to the discussion. Furthering on from this, why, in the next scene, do we see her open up to a complete stranger on the bus (totally breaking public transport etiquette) when she refuses to speak to the counsellor?

While the ending does go some way to satisfy and seek forgiveness for the rest of the film, it is too little too late.

There is the sense that this film will just flow gently into the ebb of hundreds of other films and be forgotten and one that I would not watch again.

Daphne is available to purchase on DVD now.