Writer-director Maria Speth has tried to create something insightful with Tochter (AKA Daughters), but I’d have to say that it falls down in a number of ways, making the final experience one of mild disappointment. That’s a shame, because the main performance from Corinna Kirchhoff is something wonderful to watch.

Kirchhoff is Agnes, a woman who is searching for her daughter. She has travelled from home to identify a body, and is then relieved to discover that it’s not her missing girl. Unfortunately, she has no way of finding, or contacting, her daughter. At the end of her rope, she spends time mired in sadness, guilt and loneliness. One evening, after a few drinks too many in a restaurant, she is driving around and hits a young woman named Ines (Kathleen Morgeneyer). Ines then gets into the car and doesn’t seem in any rush to leave. It turns out that Ines is temporarily homeless. This allows Agnes to have a young woman around who may fill the void left by the disappearance of her daughter. But how patient will she be with such a troublesome young woman? 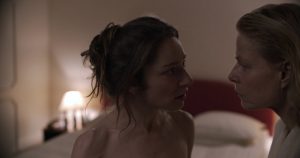 Speth doesn’t fully squander the potential of her movie, but she doesn’t do herself any favours either. A lot of the dialogue is fine when it’s examined separately from the rest of the components. The camerawork is also smooth and steady, for much of the runtime. Unfortunately, things quickly become strained when viewers realise just how antagonistic and disrespectful Ines is. If she was just a little bit easier to warm to then the film would have been greatly improved. Of course, the fact that Agnes still manages to warm to her is testament to just how desperate she is to find a substitute for her missing daughter, but that still doesn’t make it fully believable.

As already mentioned Kirchhoff is great in her role. Morgeneyer is also very good, to be fair, and certainly fearless at times. It’s just that the script leaves her so unpleasant to spend time with, for the most part. There are others onscreen, but not many make an impression apart from a night concierge practicing some tap-dancing moves while he thinks everyone in the hotel is sleeping.

Speth has some good ideas to work with, but the final product feels half-cooked, as if she doesn’t know where she wants to go with her premise. Having said that, there are a number of very good moments throughout, and the ending works very well. So it’s not as successful as it could have been. It’s worth a watch though.