Day of the Flowers

Day of the Flowers – a reference to the Dia de las Flores festival in Cuba – is a lighthearted, romantic family melodrama and potential crowdpleaser for a Saturday night in at best. That doesn’t sound like a glowing recommendation for a feature film but I don’t think it is more than that or even pretends to be. According to the film poster it is ‘a heart-warming tale of romance’, ‘funny and emotional’ and ‘life-affirming’ and I guess it has a bit of all of that but what it has become known for most is Cuban ballet dancer Carlos Acosta’s promising film debut (well, not technically as he appeared in 2008 in ‘New York, I Love You‘ opposite Natalie Portman) which, for those hoping for that, does not include any ballet dancing I’m sorry to say.

On the downside, this film in my opinion loses itself in too many cliches and flat, two-dimensional characters which are presented to the viewer as stereotypes: one of the leads is Rosa (Eva Birthistle, the Irish actress best known for her TV work in ‘Case Sensitive‘, 2012 and ‘Strike Back‘, 2011), the self-important leftwing activist, who, rather predictably, is introduced to us in one of the first scenes of the film, on the streets of Glasgow, during one of her latest political protests and looking rather scruffy and self-righteous. The next thing we are being told is that she has been named after Rosa Luxemburg, the German revolutionary socialist, for which there is really no need as by then we already understand who her character is. Her sister Ailie (Charity Wakefield, ‘The Raven‘, 2012 and ‘Mockingbird Lane‘, 2012) on the other hand is the fashionista and with her model-like proportions and figurehugging outfits clearly the complete opposite of Sara, something the director feels he needs to rub in our face a little too often through her many outfit changes and sisterly squabbles. It doesn’t get any better with the dodgy Cuban romeo, Ernesto (Christopher Simpson of ‘Brick Lane‘, ‘Spooks‘ and ‘Shameless‘ fame) and the sensual, kindhearted Tomas (Carlos Acosta). Surprisingly enough though the light, not very well-constructed and, particularly towards the end of the film, confusing and twisted storyline gets concealed by a certain charm which almost makes the film likeable, uplifting and enjoyable. The biggest star of the film is undoubtedly the Cuban setting and the filmscore which manage to distract attention from all the deficiencies the film is suffering from. Some of the shots are beautiful and we are even shown the grim realities of the poverty-stricken country which clearly don’t always live up to the romanticised image of revolutionary Cuba Rosa has in her head. 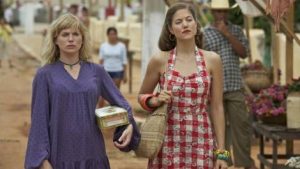 As for the story? Sara and Ailie are the estranged daughters of what was in the 1970s an idealistic socialist who spent a long time in Cuba aiding Cuban revolutionaries before moving back to the UK and living the high life. During a ceremony in commemoration of their father Rosa decides to steal his ashes from their wicked stepmother in order to scatter these in Cuba, a far more worthy destination for her father’s remains than having them turned into a golf trophy by her stepmother. Her flirtatious sister is determined to come along for the ride but is mainly in it to have some fun and a good time. As they travel through Cuba on their way to Trinidad they fall into a series of misadventures and it is on this journey that we get to see the film’s main attraction, Cuba, once you manage to look a bit further than the stereotypes of rum, cigars and salsa music. 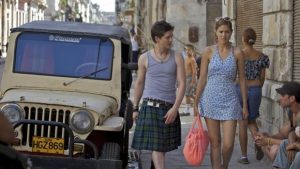 On the whole the film is almost likeable to watch with decent acting performances by Eva Birthistle, Charity Wakefield and Carlos Acosta but it is let down by a script which limbs too much on trying to present some kind of political engagement and a feel-good Richard Curtis-esque production at the same time.

Day of the Flowers was released in cinemas 29th November 2013.