Written and directed by a man named Savage Steve Holland, Better Off Dead . . . is one of the most deliriously off-kilter teen movies to ever make use of the well-worn template. The fact that it’s so surreal and unique, while also providing some solid laughs and a likable main character (played by John Cusack) to root for allows it to hold up well, even almost thirty years after it was first released. 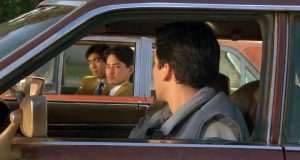 Cusack is Lane Meyer, a young man who is quite happy as the movie begins. He has a beautiful girlfriend (Amanda Wyss) that he’s obsessed with, a good buddy (Curtis Armstrong) to hang out with and, generally, a good, if unspectacular, life. Unfortunately, that all starts to slide into an abyss when he’s unceremoniously ditched in favour of a more handsome option (played by Aaron Dozier). Contemplating suicide on a number of occasions, Lane gets through his days by using his fertile imagination to distract himself from his many failings. But daydreams can only get him so far. He knows that he needs to do something big to win back the woman he loves. And while making his plan, he ends up spending some quality time with the lovely Monique (Diane Franklin), a French student stuck in the same house as Mrs. Smith (Laura Waterbury) and her unappealing son, Ricky (Dan Schneider). 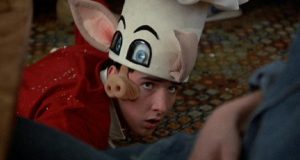 Cusack is great in the central role, deadpanning from one strange situation to the next, and Armstrong is good fun as his friend, but there’s no denying that Amanda Wyss is lovely enough in her role, and that Diane Franklin is just gorgeous as Monique, making it easier to understand just why the main character is occasionally acting insane. David Ogden Stiers and Kim Darby are also both enjoyable and amusing as the parents of our “hero” and Aaron Dozier is suitably arrogant. Waterbury and Schneider raise some giggles in their attempts to develop relations with Franklin’s character. 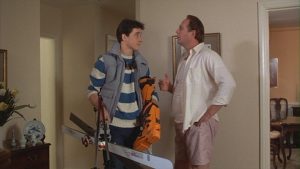 The fact remains, however, that this film is so good not because of the characters, or not JUST because of the characters (and who can forget that malicious paperboy wanting the money due to him?), but also because of the way it refuse to stay within the parameters of any standard teen movie. There’s some fun animation, a dancing hamburger, some strange moments around the dinner table and some impressive skiing. And that’s not even the half of it. 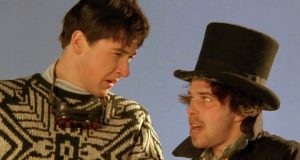 This may remain the best movie that Savage Steve Holland has to his credit, although some may argue a case for One Crazy Summer, so you should definitely give it a watch. You never know, you might feel better off for having done so.