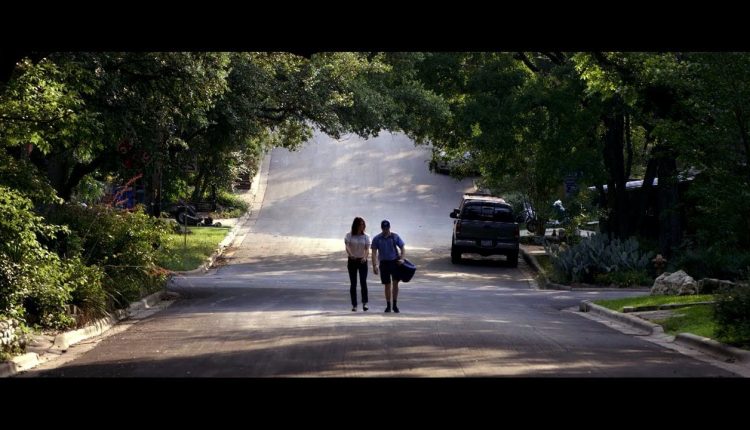 Ephemera. Things that exist, or are used or enjoyed for only a short time. Collectable items that were made to only have short-term usefulness or popularity. Letters, tickets, stamps. That is what Jake Oelman’s 2013 film Dear Sidewalk is about – things that you might not think are important, things that might seem small or insignificant, but hold more meaning than you’d ever expect. This film feels like a love letter all of its own.

Dear Sidewalk tells the story of Gardner, a 24-year-old mail carrier, troubled by his upcoming birthday. A quarter-life crisis already biting at his heels, his safe, regimented life is unsettled when he meets recent divorcee, Paige, who, despite seemingly being his opposite in every way, is going through a midlife crisis of her own. They strike up an unlikely friendship, then an even unlikelier romance which, although doomed from the start, gives them both a little perspective on life.

Entered into the 2013 Austin Film Festival, this happy little movie is an unexpected treat. The colourful cast of characters are all so varied and wonderfully eccentric whilst still being recognisable. They are people you know, people on your street, but this film cherishes that normality and makes it beautiful.

Joe Mazzello makes Gardner so amiable and is incredibly endearing to watch. A uniquely subtle actor, he makes the character so likeable, and your heart aches for him when things start to fall apart. Josh Fadem is wonderful in the role of Calvin, Gardner’s brother, and provides a lot of the film’s comedy, whilst still being an incredibly affable and gentle character.

Even the secondary characters are entertaining. Gardner’s fellow postal workers, the people on his route, they are all enchanting, and give Dear Sidewalk layers you might not have expected when you settled down to watch. It’s only a shame that we don’t see more of them. The focus shifts between Gardner’s relationship with the people he is proud to serve, and his awkward romance with Paige. You’ll definitely be itching to start writing letters again once the film is over, so perhaps it would have been nice to concentrate more on the, unfortunately struggling, United States Postal Service, beatified in this film, and less on the somewhat one-sided, uncomfortable relationship Gardner has with Paige.

Wonderfully earnest and refreshingly unpretentious for an indie movie, Dear Sidewalk will make you chuckle with its dry humour, and then in the next minute, turn around and make you cry. The plot might seem a little unfulfilling on the first watch, but, sweet and fun, the film is easy to watch again and again, and you’ll quickly discover that what appeared unsatisfying is just unconventional, and its heart more than makes up for it. Dear Sidewalk, much like Gardner’s stamps, is a little piece of ephemera all of its own.