by Katie Smith-Wong
in Film Review

There is a time in everyone’s lives where they dream of being someone else.  Whether it is in looks, lifestyle or in the case of the debut full-length feature by African American filmmaker Justin Simien, their race.  A hit during this year’s Sundance Film Festival, this satirical comedy explores the troubles of being an ethnic minority in the cutthroat world of an Ivy League college.

Dear White People follows the racial-related tensions between a group of students at the prestigious Winchester University, which eventually lead to a full-scale riot at a controversial Halloween party.

The film’s satire lies in its emphasis on racial stereotypes and common plot elements of teen films that are almost considered cliché, such as taboo relationships, sexual confusion and the notable ‘jock’, ‘nerd’ and ‘rich kid’.   The film comprises so many ignorant assumptions about African Americans, such as them being gangsters wearing lots of bling that exert their coolness by waving a Glock around, it is quite surprising that the film hasn’t publicly offended at least one person. 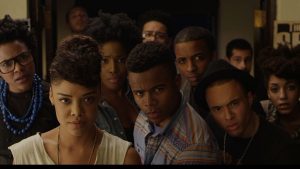 But, to say that Dear White People is a ‘race’ comedy is just providing it with a convenient label – it is much more than that.  Using an entertaining script and his talented cast, Simien combines elements such as racial identity, politics and equality and places them in a contemporary setting, rather than in the past when university students may not have known how to make a stand.

The characters are an eclectic melée of personalities, which are complex yet engaging.  From loner journalist Lionel (Tyler James Williams) to the rebellious, fame-hungry Coco (Teyonah Parris), they all bring something into the mix and give Dear White People the wit and identity the film needs, saving it from becoming a misfired, messed-up mix of ideals.  Out of the ensemble, Tessa Thompson’s headstrong Sam White stands out a mile, as she essentially brings heart, wit and a sharp tongue into what is the film’s most direct and charming character.

In short, don’t let the racial satire put you off – Dear White People is sharp, entertaining and probably the coolest film of LFF 2014.