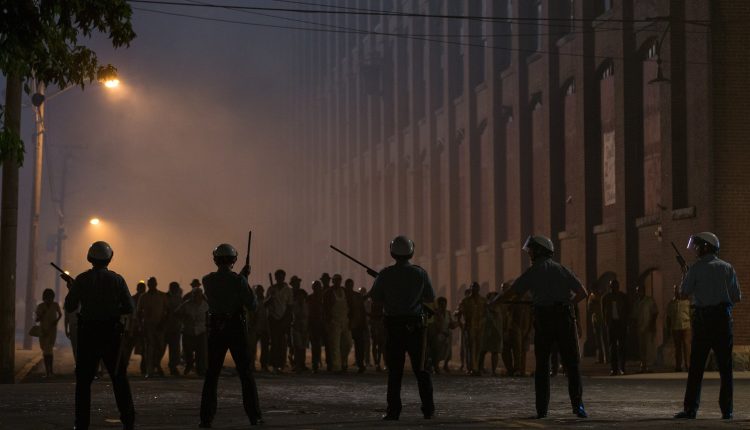 When the racially charged 12th Street Riot erupted in Detroit in July 1967, it lasted for five days and caused intense city-wide destruction and violence. A notable event that occurred during the riot is the Algiers Motel Incident, when three black teenagers were killed by police. The occurrence forms the basis of Detroit, the latest feature by Academy Award winner Kathryn Bigelow and her third collaboration with journalist and screenwriter Mark Boal.

The theme of racism is established from the offset and sets the tone for the film. After a raid at a speakeasy, African Americans are shown to rebel against the mistreatment from white officials, who subsequently use their position of authority to try and uphold the law. However, as the film introduces racist officer Krauss (Poulter) and indifferent Flynn (Ben O’Toole), it takes a darker turn as they use their job to unapologetically justify their actions. This blatant abuse of power establishes Detroit‘s unsettling tone, which only worsens as the film progresses.

Captured through Bigelow’s intimate close-ups and grainy, handheld shots, the events at the Algiers Motel are deeply affecting. She captures the terror experienced by the suspects and allows Boal’s screenplay to build the tension in the film’s second act, which quickly descends from childish to terror in a matter of moments. The motel sequence is a mental assault on the senses (and fingernails), as each character is taken to the verge of an emotional breakdown and audiences can do nothing but watch the horror unfold.

Although he is shown as a pivotal character, John Boyega’s Melvin Dismukes seems to have little to do. Portraying an African-American with a sense of authority, he displays a hesitation to reinforce his position that reflects a sense of cowardice and reluctance, denying him the chance to heroically stand up against the racial attacks he is forced to bear witness to.

Poulter shines in his unrelenting performance as the immoral Krauss, whose racially influenced disregard to others lead his colleagues down a dark path. Algee Smith dominates the third act by delivering a compelling performance as traumatised singer Larry.

Overall, Detroit paints a grim and upsetting picture on civil rights in the 1960s, but one that needs to be depicted for modern audiences. Through Bigelow’s direction and a standout performance from Poulter, it needs to be seen to be believed.

Detroit is out in UK cinemas on Friday 25 August.