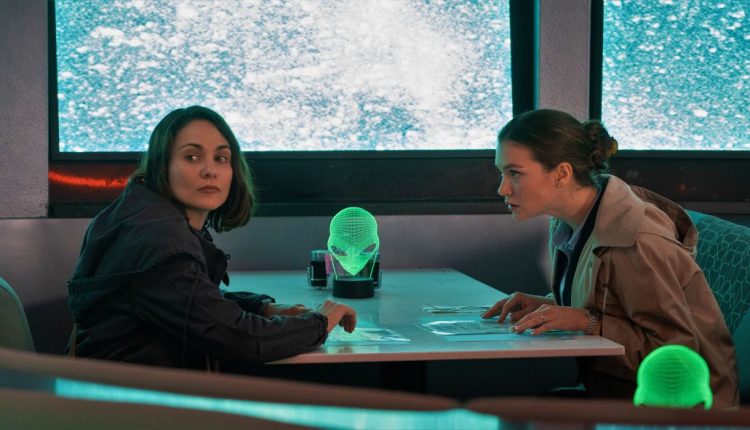 Abby (Tuppence Middleton) is a troubled young woman who, when a child, witnessed the abduction of a boy at a beauty spot near the famous Niagara Falls. Scared of not being believed Abby kept what she saw a secret, only telling her sister Laure (Hannah Gross) who, quite naturally, thought she was making the story up. Years later when the sisters return to the area to dispose of some family property following their mother’s death, Abby stumbles upon clues to the identity of the missing boy which ultimately involve her and Laure in a disturbing mystery that has haunted the locale for generations.

Some film’s release dates are unfortunately timed. Take Disappearance at Clifton Hill. Through no fault of its own this new Canadian thriller was due to come out in America and Canada at the beginning of the year, which of course coincided with one of the worst global health crises for generations. Now one could blame the COVID-19 pandemic for the fact the film made a somewhat hushed appearance on the entertainment radar. But there again maybe it’s just the fact the film isn’t actually that exciting.

Clearly selling itself as a moody mystery with as many twists and turns as the legendary falls where the action is set, the film none-the-less lacks any real heart to capture the viewer’s attention. Admittedly some elements have potential: a wacko lady who keeps her disabled husband confined to a wheelchair and locked in their house; a local landowner and developer who has a secret penchant for kinky desires which are never fully disclosed; a podcast star (played by David Cronenberg) who who transmits his thoughts on local mysteries and conspiracy theories from the basement of a fast food restaurant. None of these ideas however, which individually would make an ideal plot for a whole film, are developed coherently enough to make the viewer care about the story’s overall outcome – though clearly they’re all connected to varying degrees with the disappearance of the boy at the film’s outset. Even the inclusion of Cronenberg – that master of unhealthy cinematic perversions – one feels isn’t capitalised upon, his character reduced to the occasional brief appearance, muttering deep thoughts in low tones before slouching into the shadows once more.

The film looks mesmerising – grey, windswept days and neon-lit evenings perfectly evoke the transient tackiness of Niagara Falls, an area that’s natural beauty has been destroyed over time with manmade vulgarity created to appeal to an undemanding public. However the experience of watching the film leaves you with a strange sense of dissatisfaction similar, one imagines, to visiting the area for real.

In and of itself, watching Disappearance at Clifton Hill provides a harmless way to spend a couple of hours if you’ve nothing better to do. However, upon viewing you’re left with the impression that it does very little, meaning if much of the general populace weren’t currently confined to their homes and hence reduced to watching anything new available, one can’t imagine many going out of their way to pay Clifton Hill a visit.

Disappearance at Clifton Hill is available now on Digital Download, and on DVD from August 3rd.