I remember quite a few people being quite excited back when a big budget (well, sort of) TV movie of Doctor Who was announced. Steven Spielberg had his name attached to it in some capacity, either a producer or executive producer or someone who once had a quick chat with one of the neighbours of the executive producers or something, and it was going to be a big comeback adventure that the character deserved after some time in the doldrums. Doctor Who, the TV show, wasn’t the hit show it used to be, you see, and something major was needed to get audiences reconnecting to it. Kids no longer wanted stories broken up into 5 or 6 30-minute episodes. They wanted everything wrapped up on a weekly basis. In 1996 this movie looked like the thing that would save Doctor Who, with people at that time completely oblivious to the great future resurgence the character would have in 2005. I think the fact that the character only returned to our screens nine years after this TV movie tells you all you need to know about how successful it was. 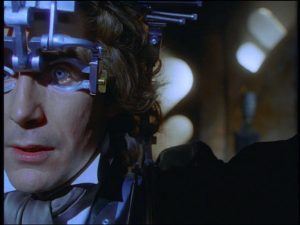 Poor Paul McGann tries, he really does. He’s good in the role of The Doctor, a great mix of intelligence, quirkiness, fun and seriousness. Exactly as I like my Doctor to be. Unfortunately, he’s in the middle of a horrible plot that centres on a millennium clock, and he’s also surrounded by a supporting cast that includes Yee Jee Tso being dire, Daphne Ashbrook being not quite as dire, but poorly handled by the script, and Eric Roberts being so hammy that it’s illegal to let anyone Jewish watch his performance. The style of the whole production is slick and Americanised, which shows just how misjudged a number of people were as they attempted to update a very British sci-fi hero.

The sad thing is that the essence of the character, reflected in the performance by McGann, is still there. The two hearts beating at the centre of the whole thing are most certainly from Gallifrey, and a number of moments between The Doctor and Dr. Grace Holloway (Ashbrook) are pretty good. I even appreaciate the fact that a lot of time wasn’t wasted on a recap that would bring everyone up to speed. Ironically, that makes the mishandling of everything else all the worse. This was made for fans who already knew the character and his adventures, so why they thought turning the whole thing into something that wouldn’t look out of place on the Sunday afternoon schedule of the SyFy channel is beyond me. 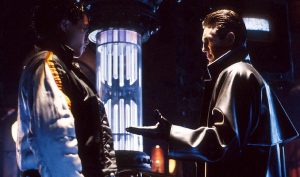 Matthew Jacobs is the writer who can shoulder a lot of the blame, but director Geoffrey Sax compounds every mistake with his choices. It’s also worth singling out Roberts for his performance. It’s obvious that he was aiming to be fun and over the top, but it goes so far beyond the acceptable that it throws the whole film off balance. The scenes that have him sharing screen time with Yee Jee Tso are almost painful to watch. 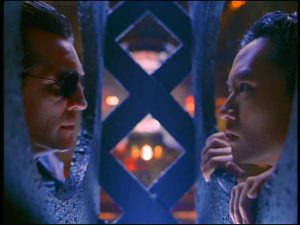 McGann has since won over a large portion of the Doctor Who fanbase, thanks to his work on the many audio adventures that have been released (and also his appearance in a certain short film entitled The Night Of The Doctor – available to view here), and he deserves that goodwill. Sadly, the same cannot be said of most of the other people involved in this awful, messy disappointment.