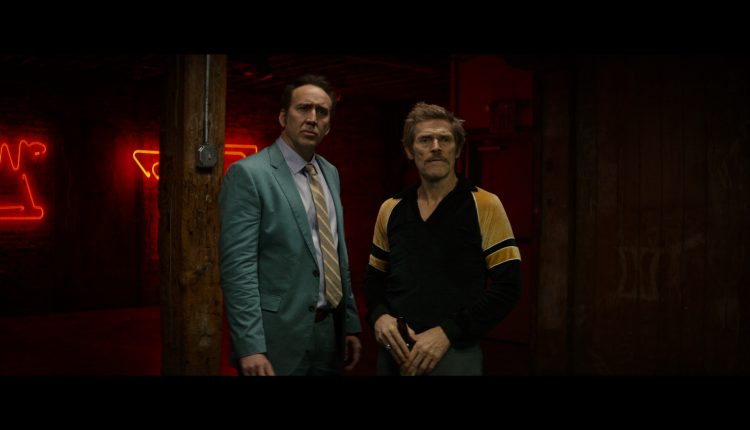 To call Dog Eat Dog uneven is to do a great disservice to all gently sloping tables. Paul Schrader’s amped up overdose on style and depravity doesn’t really have a steady level to stray from in the first place. It’s a series of inexplicable darts in multiple directions at the same time, ostensibly tied to an ex-con kidnap caper that matters not a jot to the overall experience. That it’s not very good also matters little to a film that doesn’t try to be good by any conventional assessment.

Schrader himself, better known for his screenwriting collaborations with Martin Scorsese on Taxi Driver and Raging Bull, and later as a director always willing to go the extra mile away from sense and sensibility, has underplayed his new film. In interviews he is at least under no illusions as to its place in the cinematic pantheon, choosing to make it simply to work with Nicholas Cage again and prove they can succeed after the failure of Dying of the Light.

Cage is Troy, the leader of a trio of ex-cons all finally out in the wider world. In an unusually calm performance, he plays the anchor to close comrade Diesel (Christopher Matthew Cook), a giant rock of a man prone to the occasional outburst, and Willem Dafoe’s wiry, utterly unhinged Mad Dog. It’s with Dafoe the film opens, in a prologue that sets the tone as well as anything has in recent years. In a pink house he loses it to split screen hallucinations and odd phone calls before butchering his girlfriend and her kid. It’s not really relevant to the wider narrative, but then the narrative is barely relevant to Dog Eat Dog.

As much as there is a story, it involves the trio trying to earn a little cash, first through a drugs boost and then a kidnapping that goes wrong almost as soon as it’s started. The whole thing is orchestrated by El Greco, a raspy mobster played by Schrader in his first acting role. Describing the plot in any more detail would only give the impression it holds more importance than it does. Schrader uses Matthew Wilder’s screenplay as a jumping off point, preferring to spend his time playing around with a variety of technical tricks and bloody violence.

In the downtime Schrader is happy to let them chat. Conversations fall into the pop philosophy field, ranging from the joy of carpeting on bare feet to discursions into the likelihood singer/songwriter Elliott Smith died by his own hand. Women feature only occasionally, usually as bewildered and slightly intimidated prostitutes, for this is mostly a male show, burning up with testosterone stereotypes.

Even with all that testosterone set alight, Dafoe is the only one able to wrench attention from Schrader’s scattershot pyrotechnics, holding court over proceedings as he shifts Mad Dog between gleeful violence and needy pleas for help and friendship. The rest of the time Dog Eat Dog jolts through changeable pacing, unexpected camera angles and leftfield effects, creating one almighty mess that somehow manages to hold the eye.