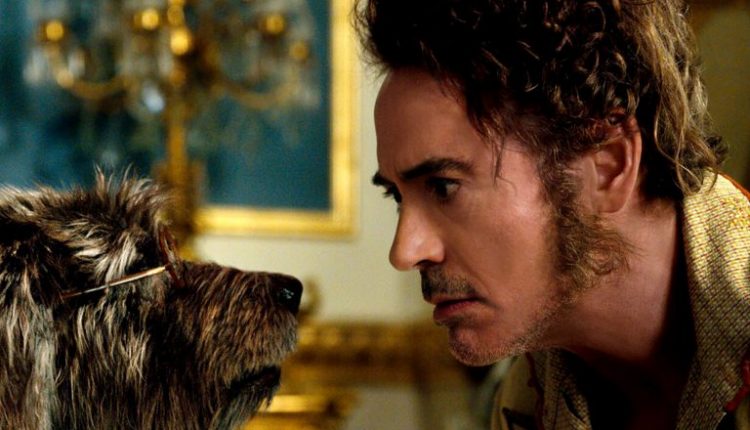 Talking animals may be a cute anecdote in family-friendly films for those that routinely find furry mouthpieces a hysterical happening…particularly for the impressionable kiddies that do not know any better but to embrace this kind of innocuous entertainment. But if you are a high-caliber A-list movie star (yes Robert Downey, Jr…this is aimed directly your way) whose notable on-screen Marvel blockbuster Iron-Man superhero legacy is reduced to being followed up by a starring role as a faulty and fluffy dense animal doctor conversing with kooky critters then there is some explaining that needs to be put forth.

In many ways, the cinematic animal trap known as the exceedingly anemic Dolittle turns Downey and his fellow gifted performers into something of an overblown, embarrassing dancing bear act. One is not quite sure what is more puzzling about the toothless treat that is Dolittle…the fact that CGI creatures are conversing with the hapless Dr. John Dolittle or the high-paid human element of Hollywood’s who’s who of participants that signed on the dotted line to appear in this forgettable pest control sideshow. Dolittle is aptly titled because this updated remake of the classic English story does little to bring anything imaginative, inviting or definitive insight to this misguided menagerie of furball misfits. For a kiddie film that features a healthy representation of past and present Oscar winners and nominees the forgettable fantasy fable Dolittle is staggeringly insipid. The high-priced talent involved in this fleabag film project is remarkably baffling.

The immediate question that comes to mind is the following: was anybody clamoring for another braindead Dolittle entry to emerge in the millennium age? (apparently the nagging remakes in the early 2000’s weren’t quite enough). Sans Tony Stark’s bright metal makeup and sardonic wit, Downey Jr. now weakly toils as the famed animal whisperer joining fellow Dolittle Rex Harrison and Eddie Murphy. The widowed Dolittle–losing his great love Lily (Kasia Smutniak) to the beyond–has a unique talent in terms of communicating verbally with the creatures both big and small.

The despondent Dolittle seems to have no tolerance for people and decides to shut off from the outside world while being holed up in his posh mansion. Soon, the good doctor will find some purpose to make himself quite useful by coming to the aid for the Queen of England. Joining Dr. Dolittle in his quest to serve the Queen includes youthful sidekick Tommy Stubbins (Harry Collett), Queen-appointed rep Lady Rose (Carmel Lardiado), and of course Dolittle’s band of garrulous beasts.

The novelty of the animals’ verbiage, as we already know, is the fact that they are being voiced by a notable variety of established marquee names from American personalities such as wrestler/actor/TV pitchman John Cena and actress Octavia Spencer to English icons Emma Thompson and Ralph Fiennes. Otherwise, the throwaway quirkiness of Dolittle is buried under a dismissive barrage of fart jokes, Downey Jr.’s iffy Brit accent and makeshift CGI effects that look cheesier than a hungry church mouse’s dinner plate.

Curiously, it is a mystery as to how writer-director Stephen Gaghan could concoct such kid-friendly tripe given his previous Syrianna on-screen pedigree. Downey’s Dolittle may have the ability to shoot the breeze with the hounds but this tepid four-legged fantasy belongs right in the doghouse.