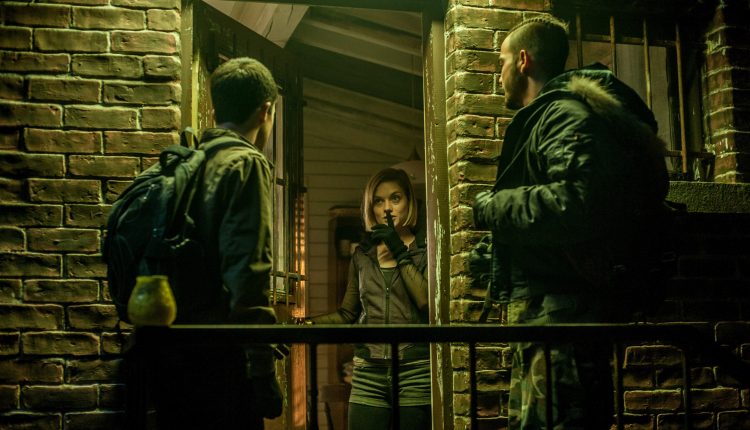 Three young friends – Rocky (Jane Levy), Alex (Dylan Minnette) and Money (Daniel Zovatto) – have the opportunity to rob a house, the gains of which will change their dead-end lives forever. The said dwelling – in a rundown area of Detroit – is the abode of a blind war veteran (Stephen Lang), who came by a fortune as the result a of tragic family accident. The thieving trio break into the house and begin to search for the money. But the owner is still at home and, after discovering the intruders, sets about extracting his own form of vigilante justice against the unsuspecting kids.

Seldom has a film managed to produce so many false starts – or perhaps that should be stops – only to take you straight back and start all over again, whilst keeping you transfixed to the screen. Several occasions in the new horror film Don’t Breathe see characters find themselves in situations where an escape from, or remedy to, their predicament is within their grasp, only for it snatched away just at the last moment. And this is where writers Fede Alvarez (who also directs the action) and Rodo Sayagues, come up trumps. The will they, won’t they scenarios which the characters find themselves in, manage the difficult task of holding the viewer’s attention throughout the ninety minute running time. Quite an accomplishment considering that the action really boils down to little more than a protracted chase around a spooky house.

Setting the film in a down-at-heel suburb of that down-at-heel American city Detroit, was a clever movie by the filmmakers. The desolation of this once thriving metropolis is well known throughout the world, and its sense of aimless hopelessness simply adds to the futility of the character’s lives resulting in some justification for the lengths they are pushed to in the situations they find themselves in.

When you analyse it the film’s main protagonists all have their plus and minus points, with none of them being totally beyond redemption or without some form of justification for their actions. ‘The Blind Man’ fights for what he sees as the wrongs done against him, Rocky does what she does to give her and her baby daughter a better life, and Alex for his part is simply trying to help Rocky with whom he is clearly infatuated: in fact Money – aptly named as that’s all he seems to be in it for – appears as the only one who is just downright nasty. That none of them are necessarily people you’d want to associate with in real life is beside the point, and anyway, how do you know how far you would go yourself if your back was against the wall. The actors all turn in totally believable performances, with Levy’s portrayal of Rocky – who finds herself fighting for her life in an expanding circle of increasingly desperate situations – particularly noteworthy.

The only downsides to an otherwise faultless exercise in tension building is a sordid plot twist which, though understandable given the situation playing out, is none-the-less hard to stomach, and the fact that the end is left open to some form of possible sequel. Lets hope that the filmmakers don’t decide to revisit this house of horrors, and leave well enough alone what is a marvellously taut and effective example of the cinematic chiller.