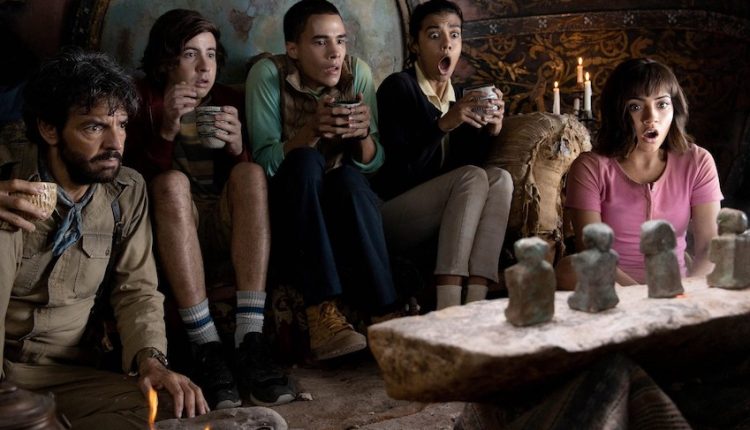 When it comes to cartoons turned live-action adaptations, Dora the Explorer doesn’t exactly spring to mind. Created in 2000, it focuses on a seven-year-old Hispanic girl who loves exploring with her monkey and a talking backpack. But times have changed and live-action remakes are ruling the box office. So, how do you update a character like Dora? Simple – add a good decade to her age.

Dora and The City of Lost Gold stars Isabela Moner as Dora, who has spent her life living in the jungle with explorer parents Cole (Michael Peña) and Elena (Eva Longoria). Eager that Dora spends time with other people, they send her to the city. However, she, her cousin Diego (Jeff Wahlberg), and schoolmates Sammy (Madeleine Madden) and Randy (Nicholas Coombe) are quickly taken by mercenaries looking for Dora’s parents – and a lost Incan civilisation.

Making Dora a teenager is a bold but smart move as it allows Dora the Explorer to not appeal to kids but adults that have grown up with the series. It also enables director James Bobin to incorporate the unique style of comedy that appeals to all ages – a key element that made Bobin’s The Muppets successful.

However, Matthew Robinson and Nicholas Stoller’s simplistic screenplay that integrates elements from the cartoon steers more towards younger audiences. Combined with Bobin’s action-comedy direction, it creates an unbalanced tone that makes it hard to take the film seriously. It also softens the edge of certain scenes and stops Dora and The City of Lost Gold from being more than a typical kid-friendly adventure.

Despite its stunted development, the film’s key selling point is Dora herself. Though no longer a little girl, an isolated upbringing has retained her child-like personality that highlights a total lack of awareness to city life. Along with her intelligence and bubbliness, she quickly becomes a threat (mainly to overachieving Sammy) and a naive outsider. It is not until the group finds themselves in the jungle that they see the real Dora – fearless and undaunted by the elements, she transforms into a surprising leader.

Bright-eyed Moner is charming as Dora, balancing infectious enthusiasm with a curiosity that feeds her inner explorer. She also serves as a ‘refresher’ to the gang, who mostly comprise of movie stereotypes. Despite being the cast’s more established actors, Peña, Longoria and Derbez’s amusingly awkward performances keep Moner in the limelight, as well as allow her to lead the story.

It is easy to scoff at another live-action adaptation. But what Dora and the Lost City of Gold in originality, it makes up in charm and energy, as well as a winsome performance from Moner.

Dora and the Lost City of Gold is out in UK cinemas on Friday 16 August.