The second feature directed by Richard Ayoade, The Double is quite a different beast from his debut, Submarine. Based on a novella by Fyodor Dostoevsky (and I’m not going to pretend that I’ve read it), this is a dark thriller set in a grim world full of suicides, jobsworths and a general air of misery. There IS humour here, but it’s also very dark.

Jesse Eisenberg plays Simon James, a young man trudging through life. He’s never noticed by the people that he wants to be noticed by, such as his manager (Wallace Shawn) or a girl he admires from afar (Mia Wasikowska). Simon just isn’t confident, and so he doesn’t make much of an impression. Which explains why nobody bats an eyelid when James Simon (also played by Jesse Eisenberg) appears as a new employee, despite the fact that he’s obviously Simon’s double. But where Simon is awkward and lacking confidence, James is assured and always able to get what he wants. And what he wants might end up upsetting Simon. 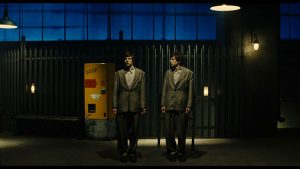 As unfamiliar with the source material as I am, I must say that The Double proved to be an ultimately disappointing experience. It has plenty of plus points – Ayoade continues to show that he’s a great director, and Eisenberg shines in the dual role – but there’s just something missing, something that creates a sense of disappointment during the second half as you realise that you can tell exactly how everything is going to pan out. A movie with a premise this interesting shouldn’t turn into something quite so predictable.

Ayoade adds some great little touches to keep everything feeling slightly off-kilter (in the visual details and also the audio throughout the movie), and he certainly seems to be a director capable of getting the best out of his cast. As well as Eisenberg doing such great work, Wasikowska enjoys one of her best roles in a long time, and it’s always a delight to see Wallace Shawn in a role that allows him to shine. Cathy Moriarty, Noah Taylor and Yasmin Paige also do their bit to elevate the material. 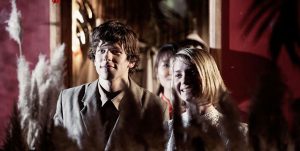 I wanted to like The Double, but it just never works as well as it should, despite consistently interesting aesthetic choices and the performances from all involved. It IS a good film, and many have enjoyed it more than I did, but it just didn’t work for me, despite some individual moments throughout that managed to impress.