Following up his pretty rubbish Submarine, Richard Ayoade has returned with another literary adaptation, this time of Dostoevsky’s novella The Double. With Jesse Eisenberg playing the socially awkward and general doormat Simon James, plus his confident doppelgänger James Simon, this film had potential. That is, until it started. The story follows Simon James, a man who is largely ignored as he’s “kind of a non-person” who gets a fright when his exact double pops up in the form of James Simon. Soon enough, James has befriended Simon’s boss, crush and proved himself to be the exact opposite of Simon. 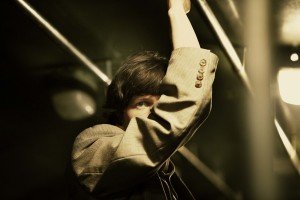 The story is just brilliant. It’s messed up, funny and has a great ending, but somehow Ayoade has taken all of that and made it boring. It starts off well enough but soon descends into cameo central, to the point where I wouldn’t have been surprised if Noel Fielding had popped up dressed as Richmond from The IT Crowd. Jesse Eisenberg, as Simon, plays the part he always plays, even in Rio, as the socially awkward rabbit in headlights who was born without the ability to smile. Jesse Eisenberg, as James, plays the other part he’s played as the slightly manic possibly on drugs guy, which apparently is his idea of confidence. Walking and talking quickly a confident character does not make, and unfortunately it was just a reprise of his character in The Social Network. Mia Wasikowska is actually decent in this, but only because her brand of surly works for the character she plays. Hannah is a quirky woman who spends her evenings staining her windows with blood and being watched by Simon from his flat opposite. 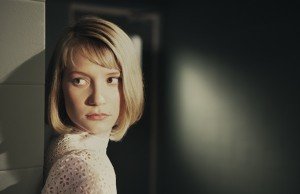 The ending to The Double is the most enjoyable part of the film. That’s partly because the actual story is so brilliant, but it’s here that the film actually gets good. If Ayoade can keep things that interesting in his future films then there’s hope yet. Maybe it’s because the ending is quite messed up and Ayoade had help from Harmony and Avi Korine (yes, really) that it works, or maybe it’s just because Dostoevsky is so great that it’s impossible to ruin all of his work. Either way, it’s a great ending to not a very good film. 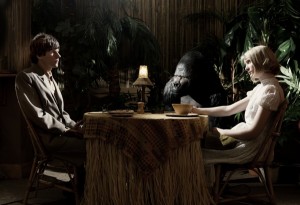 Overall, The Double is a step up from Submarine, although that’s not saying much. The central performances are pretty good but it never clicks together as a film. It feels like a series of Ayoade’s friends have been roped in to fill roles and it just stays bland until the final few minutes.  It’s a really good story, but not a very good film. Third time lucky perhaps, Ayoade.