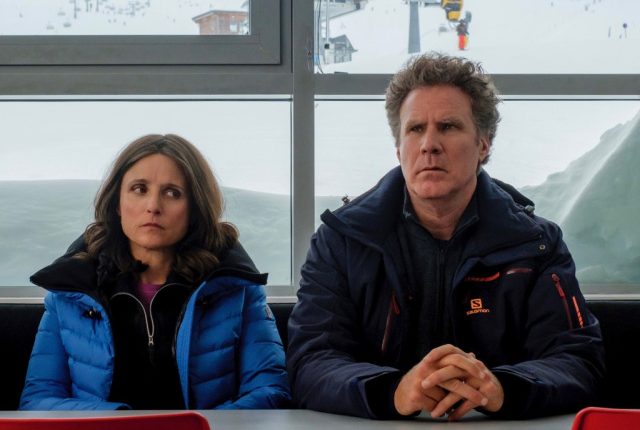 The dwindling dramedy Downhill is indeed a figurative slippery slope for the comedic powerhouse pair of Julia Louis Dreyfus and Will Ferrell. As a surfacing frustrated married couple whose shaky marital relationship is tested on a skiing vacation with their children this toothless remake is the Americanized version of Ruben Ostlund’s Swedish ditty Force Majeure. The aptly entitled Downhill is a lackluster effort that dilutes the organic impishness of gifted comic performers in both Louis Dreyfus and Ferrell.

Downhill is the latest example of a trendy move where Hollywood tries to repackage the impact of a foreign language film only to end up botching the memory of the original blueprint while rendering the updated version tediously trivial. Co-writers/co-directors Nat Faxon and Jim Rash (along with collaborative screenwriter Jesse Armstrong) oversee this listless adaptation of Ostlund’s film project with all the imagination of a dripping snowcone. Downhill will only reinforce the curiosity about the superior essence of the aforementioned Force Majeure while talents Ferrell and Louis Dreyfus are accountable for laboring in an uninspired piece of snowbound sludge.

The disillusionment is set in motion when a freakish mountain avalanche shows the true colors of self-serving Pete Stanton (Ferrell) whose panicky tendencies reveal a selfish devotion to his own well-being. Understandably, Billie (Louis Dreyfus) is dismayed that she and their two sons Finn and Emerson (Julian Grey and Ammon Jacob Ford) are left behind to suffer the shockingly massive snowy occurrence as cowardly Pete and his reliable phone head for safer ground. Pete did not leave any tracks for Billie and the boys to follow him as his ski boots took off faster than a NASA-launched missile into the deep blue skies.

Predictably, Pete’s fleeing and failing to protect his family from natural disaster harm had opened up many eyes to the vulnerable aspects of the questionable Stanton marriage. Pete’s cowardice and lack of consideration for his so-called loved ones begs many questions needing immediate answers. It is sad (and kind of funny at the same time) that the simpleton Pete can show more affection and attention for his smartphone than he can for his own wife and children. The moral dilemma of a flawed family man’s self-centered mentality should be worthy of some juicy psychological fodder. However, the premise is reduced to a flat, smirky string of moments that never truly captures the complicated compass that bewilders the Stanton clan.

It is quite a shame that the dud Downhill slams into a snowpile of missed opportunities. In what could have been an eye-opening farce with its off-kilter commentary on the foundation of a marriage’s mysterious foundation of crackling stability, directorial duo Faxon and Rash fail to give these proceedings any kind of depth or degree of slow burn outrage that would have carried this premise with pronounced edginess. Breezily conceived without any hammered conviction, Downhill is merely satisfied in its stillborn comfort zone. There is no excuse for sluggish material when employing the likes of heralded comedy cut-ups Ferrell and Louis Dreyfus by trapping them in a rudimentary romp that does not take advantage of their untapped comedic and dramatic capabilities. As the Oscar-winning screenwriting team behind The Descendants, for Faxon and Rash it is inexplicably puzzling how aimless and reductive Downhill is at its uneven center courtesy.

The marriage-on-the-rocks conflict is never quite uplifted to the imaginable heights because both Ferrell and Louis Dreyfus are restrained courtesy of stale characterizations that seem to sit there and take up space without a payoff. Ferrell’s obligatory man-child routine does not seem as distinctive as in all the other comedy clunkers he has done in the past. Louis Dreyfus fares a little better as the boxed-up, insecure spouse being reminded of her inadequacies courtesy of her doltish hubby. In the long run, the tease and tension between Ferrell’s Pete and Louis Dreyfus’s Billie feels too contrived.

The supporting cast are nothing more than designated add-ons to accentuate what little cutesy chaos that remains. Thrown into the middling mix are Pete’s associates Zach and Rosie (Zach Woods and Choe Chao) as a traveling couple. Miranda Otto is on board as sexpot Charlotte, the resort director rather sympathetic to Billie’s asinine dealings with bonehead Pete. Guilio Berruti figures in as the Italian ski instructor eye candy that Billie is encouraged to feast on for retaliation. Still, the screwball antics cannot save Downhill from becoming its own dreaded avalanche of snowflake canned foolery.