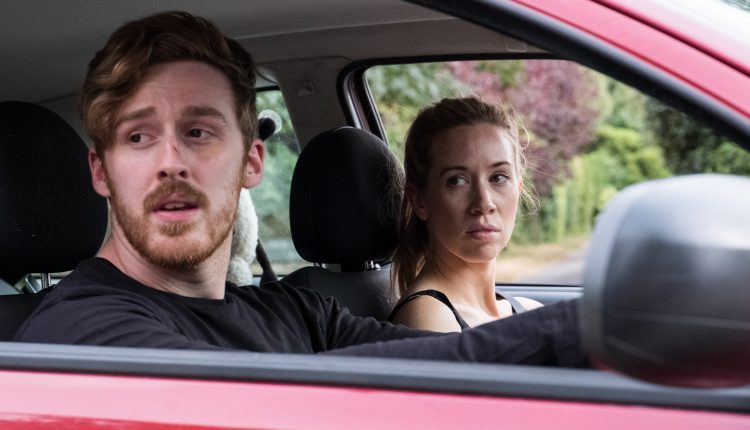 Richard Summers-Calvert certainly knows how far he can go within his shoe-string budget feature. Also starring in the film, writer and director Summers-Calvert makes it clear with his intentions of the film despite the lack of technical abilities due to monetary constraint. Like any young filmmaker, finding the best approach to this can be working in your own limitations, which is exactly what Drive Me to the End does.

Ryan (Summers-Calvert) is first introduced to us saying goodbye to his terminally ill mother (Tracey Wilkinson) as he has packed up a case to attend a family funeral. Unbeknownst to Ryan is that his mother has agreed for him to take his almost not-at-all relative Sunny (Kate Lister) there to. Despite a reluctance by both, these strangers eventually take to the road and head to the Highlands of Scotland. Here is when the British tone starts to blossom as we escape the claustrophobic interiors and the over-editing of conversations to go on this journey. The settings help this, but it’s also little nods of a pink steering wheel and Brit chit chat that help with authenticity of the scenario when these motives are often questioned due to slip-ups by a camera movement or line delivery that just doesn’t sit right.

The bright, sunshine state feeling to this tries to resemble great American road movies from before but Drive Me to the End is unable to escape the British stamp that is marked with every conversation that differs away from the plot. Hearing Ryan talking about “going to the Market with Janice.” is British mundane at it’s finest. Even if the characters don’t encapsulate the charming side of everyday Britain, the iconography of the towns and cities would paint a perfect picture for a tourism advert. Never has the North looked so friendly and inviting.

Drive Me to the End‘s intentions are in the right place and the research done for the character of Sunny, a woman on the autistic spectrum has been done with great care. There’s questionable moments that don’t appear to achieve their intended meaning. But nevertheless you can see that its heart is in the right place and provides more detail and nuance than autistic characters in movie’s past.

A mixed bag would define this film. you can excuse moments due to the shoe-string budget that are then often forgiven thanks to excellent comedic timing. But you take anything that isn’t the two main characters with a pinch of salt. Simon (David Bower), a disabled hitchhiker helps both these characters grow and gives a differing perspective once another person is placed into the boxed-in scene of a three-door car. Whilst other supporting characters go for an overstylised and brash performance that takes away the reality of this story.

It may not be ground-breaking, but for a concept that is easy to repeat itself, Drive Me to the End tries to differ whenever possible. It follows familiar beats to drama/comedy hybrids from before, but it’s optimistic viewpoint makes for a comforting watch which is needed right now.

Drive Me to the End information is available here: http://cruciblefilms.com/drive-me-to-the-end/. Available on Amazon Prime (US): September 5th.

We Are One Global Film Festival – A City Called Macau (2019)