Edge of Tomorrow is a clever and initially entertaining and witty high concept sci-fi actioner in which concept is really more important than action. How much can mortal combat really matter, after all, when the hero is caught in a time warp he escapes from by getting killed? Yet in principle, everything in this story is a matter of life or death, the very fate of the human race at stake. Our planet, so beleaguered in blockbuster-land, is once again under invasion from a network of giant spidery aliens. This time they are known as Mimics and are divided into fighters called Alphas and a central control critter known as the Omega. A series of battles is raging that sounds like World War II — England, France, Germany are in the balance — and our side is losing. Tom Cruise is Major William Cage (no relation to Nicolas, presumably), an officer of NATO who’s really not a fighter. He was an advertising person, and when monster invasion troubles began, got a commission as a public affairs officer specifically to avoid combat. The area commander, General Brigham (Brendan Gleeson), however, has other ideas: he wants to embed Cage with frontline troops. When the Major strenuously objects, Brigham has him handcuffed, branded as a deserter, knocked down to private, and sent off to a platoon of misfits on their way to the front tomorrow.

These chaps are fitted with robotic fighting devices, the kind that are popping up more and more these days in movies. Cage has no idea how to work the things. It’s fun seeing Cruise at first in the unaccustomed role of a man far out of his depth and anything but brave. The battle comes, Cage is dropped into it, and all goes horrifically. He gets killed and bang! He wakes up in cuffs again, about to be carted off to the misfit platoon. And lo and behold, the dialogue he hears is all the same as before. This happens repeatedly, with Cage hoping to get out of the loop, but also becoming more and more adept at the war game he’s been thrust into, turning gradually from the biggest loser to the smartest guy in the room. He’s turning into Tom Cruise.

So much so that after a while Cage meets up with Special Forces Sergeant Rita Vrataski (Emily Blunt), known as the “Angel of Verdun” for a famous battle, not in World War I, as one might think, but the current war, in which she killed hundreds of Mimics. Rita recognises Cage as having an ability she once had, to go back and forward in time. This is a theme Kurt Vonnegut wove wittily in his most famous novel, Slaughterhouse-Five . Only instead of slipping around in time like Vonnegut’s Billy Pilgrim, Cage returns only to that same sequence of events, saving Rita now, and collaborating with her in countless revisits. We’re not forced to watch the whole circuit every time, but instead pop into it at different points, becoming experts on it ourselves, able to recognise instantly where we are in it. Rita and Cage gradually make it further forward in the sequence, planning to reach the point where they can slay the Omega and turn the tide. 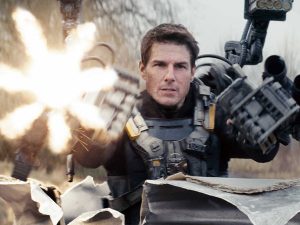 The pleasure of Edge of Tomorrow is certainly not in any one action sequence. These are all deliberately chopped up, and thus robbed of their drama, though they have moments of raw beauty at times. What we enjoy is reading the overlapping, sliced parts of time with our own increasingly knowing eyes. Character development means little here, with minor figures simply developing caricatural edges. As we get to compare the repeated, slightly altered sequences, the experience becomes a metaphor, perhaps, for the writer’s game, or, some have thought, for Tom Cruise’s resilient career, since Cage pops back up each time he’s knocked out. The fun is all in the game, the slight shifts in viewpoint from one repetition to another, the slight steps forward, the efforts to play the system by using what Cage and Rita, more and more a couple now, needless to say, know of situations from past run-throughs.

To say all this is implausible would be utterly to miss the point, but one apparent inconsistency may feel bothersome — how Major Cage, basically a coward and shirker of the fight, turns so rapidly, just by means of repeating one sequence of events, into an ace at violent combat. This is one place where the tables are turned and action overpowers concept. But that’s the point, and the charm of the story: necessity turns the cowardly Cage into a hero malgré lui. We may weary of the game’s repetitions, but this is a danger the director, with his occasionally surprising images of chaotic battle and slippery, sliding editing of time warp overlaps, does his level best to avoid.

In Edge of Tomorrow Tom Cruise has chosen not unwisely to ride again with the writer Christopher McQuarrie, who penned Valkyrie and Jack Reacher for him as well. McQuarrie has had success with mind-benders, notably the con game cult film The Usual Suspects. Edge of Tomorrow is obviously a mind-bender too (based on a 2004 novel by Hiroshi Sakurazaka), and a fun ride till it repeats its time loop once too often. At the helm is Doug Liman, who ably steered two of the Bourne films. This is neither up to The Usual Suspects nor quite worthy of Bourne, but it will easily pass muster as a summer blockbuster for smart people.