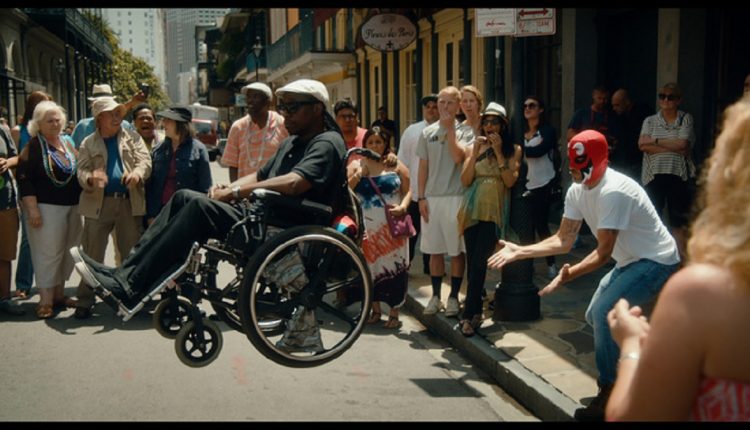 If you’ve heard of writer-director Nick Love then you may be very surprised by his move towards something a bit different with American Hero. We’re talking, after all, about the man who gave us the likes of The Football Factory, The Business, Outlaw, and The Firm (2009) in a five year run that pushed Danny Dyer into a bit of a golden period before he sank down into a glut that culminated in the awfulness of Run For Your Wife. The last film we had from Love was The Sweeney, which I’ve yet to see. But it’s apparent that the guy loves to fly the flag for Britain, even if that flag flies over a group of cinematic thugs and criminals, and he rarely ventures out of his comfort zone (anything with groups of lads being “proper lads”, drugs, violence, lots of swearing). So I’ll start my review of American Hero by saying that, whatever flaws it may have, Love deserves a tip of the hat for at least stretching himself and trying something very much outwith his usual wheelhouse.

Stephen Dorff is the main character here, a man with telekinetic abilities who wastes his gift on small tricks performed in the street (like levitating his wheelchair-bound best friend, played by Eddie Griffin) and relieving small-time crooks of their small criminal gains. His life is in a mess and he doesn’t seem to be in any rush to put it right.

Shot in a mockumentary style (well, the camera follows a couple of the main characters around and they sometimes talk to it), American Hero is obviously a low-budget piece of work. Which isn’t to say that it looks cheap. In fact, there are many scenes that throw around some decent CGI to show Dorff letting loose with his powers, and the whole thing feels as polished and well put together as some films with ten times the budget.

It’s a shame that the script ends up letting everyone down then, with a lack of any dramatic tension throughout, even when there’s certainly supposed to be some generated. Dorff and Griffin do well in their roles, but viewers would have cared more about them if the underlying elements had been given a bit more . . . . . . oomph.

You may read a few reviews that end up comparing this to the likes of Hancock and Superbob, which is slightly unfair. Although it treads similar ground, this is not aiming to be like those films. It’s simply a portrait of a messed up guy who happens to have a special gift that he spends a lot of time squandering. And it’s not bad.