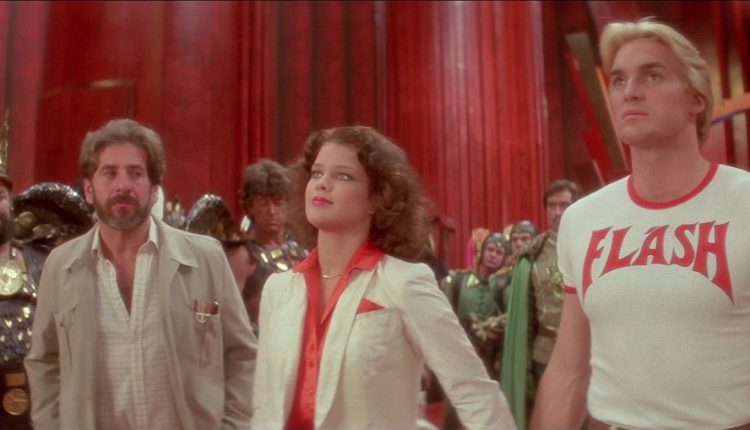 I last viewed Flash Gordon a very, very long time ago. I was a young teenager, or perhaps even slightly younger, and it was on TV. But that experience was enough to keep it in my memory for decades. If asked, I would reply that it was a firm favourite of mine. Some films just make that much of an impression when they have the right ingredients and you see them at just the right age. Young me loved the visual razzle dazzle of the movie, loved the Queen soundtrack, loved seeing a cast that included a mix of such big personalities and, well, Peter Duncan from Blue Peter. Melody Anderson was sweet and pretty, and Ornella Muti was a bit evil and alluring, and made me try to figure out why I looked forward to her onscreen appearances the most. The action was decent, the script witty, and the leads all perfectly cast.

Unfortunately, I have revisited childhood favourites many years later only to find myself confused and disappointed (with Flight Of The Navigator being a bit of a prime example – not a BAD movie, exactly, but not one that holds up well for me), so when I finally decided to revisit Flash Gordon I did so tentatively, with no small amount of trepidation.

Here’s what I ended up disliking about it. Some of the special effects haven’t held up too well, especially those showing travel through space, and Sam J. Jones, as Flash, is a bit stiff and wooden at times. And that’s about it.

Yes, I’m delighted to say that this movie remains just about as good as you remember. That Queen soundtrack is still rousing stuff (who can stop themselves from singing along with those opening credits? Not me, that’s for sure), I still feel exactly the same way about both Anderson and Muti, although I now know why I look forward more to the appearance of the latter, the production design is full of delights, the pacing is pretty perfect, and the script by Lorenzo Semple Jr. IS a witty one, often dancing between sly fun and cheesy campiness with aplomb.

And those big personalities remain a large part of the attraction. Max von Sydow is fantastic in the role of Ming The Merciless, Topol is a lot of fun as the scientist responsible for Flash and Dale Arden (the character played by Anderson) ending up with him on the planet Mongo, Timothy Dalton has a couple of great lines and delivers all of his dialogue in that purely Dalton way, and Brian Blessed uses his booming voice to lead an army of winged warriors, despite the fact that nobody can believe any pair of wings capable of actually carrying Brian Blessed up into the air.

Director Mike Hodges knows just how much to give audiences, making this both a perfect introduction for the heroic central character and also a film full of plenty to please long-time fans. He does this through both attention to detail and a sense of fun. And the casting. And by getting Queen to do the soundtrack. Although I just mentioned those things, they’re worth repeating.

Oh, you also get bore worms, mind reprogramming, Ming’s harem, lizard people, sentries with even worse targetting skills than stormtroopers, Richard O’Brien being almost exactly the same as he would be in The Crystal Maze, a whip battle on a tilting platform that also has spikes appearing from the floor, and much more. It’s a near-classic.

Flash Gordon is screening at 1535 on 26th June at Cineworld 3 as part of EIFF 2016. It is one of a number of films making up the strand known as POW!!! Live Action Comic Strip Adaptations: The First Generation.