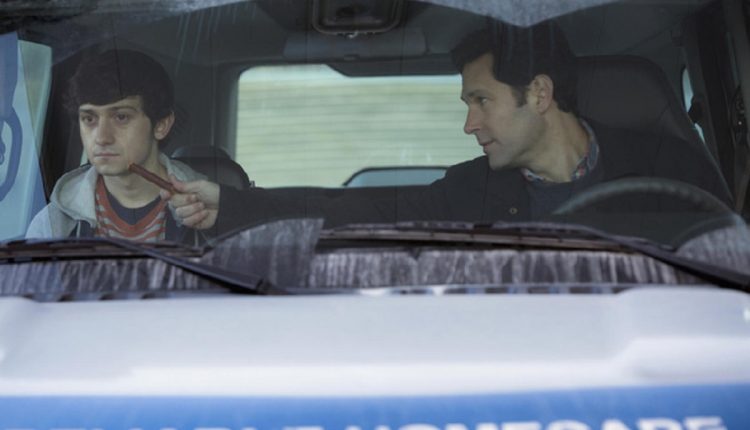 Paul Rudd is Ben, a carer. He’s just passed the course, he’s still working out some personal issues, and his first job puts him in charge of Trevor, a young man with a seriously debilitating muscular disease. Trevor likes to pretend to be choking on food, he likes to make things difficult when Ben is trying to help him on to the toilet, and he likes to generally make fun of people who underestimate him. He also spends most of his days watching TV, which leads to the inevitable idea of a road trip. And that’s all you need to know.

You can join up the dots already to figure out this entire movie, I have no doubt about that. This is predictable stuff indeed. Writer-director Rob Burnett (who adapted the novel by Jonathan Evison) never strays from the established playbook, and his arrangement of the script means that every moment is fairly heavily signposted. It would have been nice to have one or two surprises along the way, which could have been possible with some reorganising and a bit more subtlety, but I can’t say that I disliked the end result. I ended up smiling throughout, with a lot of the familiarity offset by the performances.

Rudd is doing his usual stuff here, but he and Roberts play off one another brilliantly. All of their scenes together are enjoyable and some are downright hilarious (Slim Jim, anyone? Wait and see). Jennifer Ehle also does well in a fairly thankless role, playing the concerned mother who objects to the idea of the road trip and would probably be happier if she could keep her boy housebound and safe forever. And Selena Gomez also does a good job, playing a hitchhiker who ends up tagging along with our dynamic duo.

The cynical need not look this way. This isn’t a film for folks who always want something new or gritty. It’s a bit of comfort food in movie form, which is absolutely fine when it’s done this well. It’s very funny, sometimes sweet and moving, and fairly satisfying by the time it gets to the end credits. The fact that you can stay ten steps ahead of it doesn’t undo that.

Although screened at EIFF 2016, you lucky people can catch The Fundamentals Of Caring right now, on Netflix.