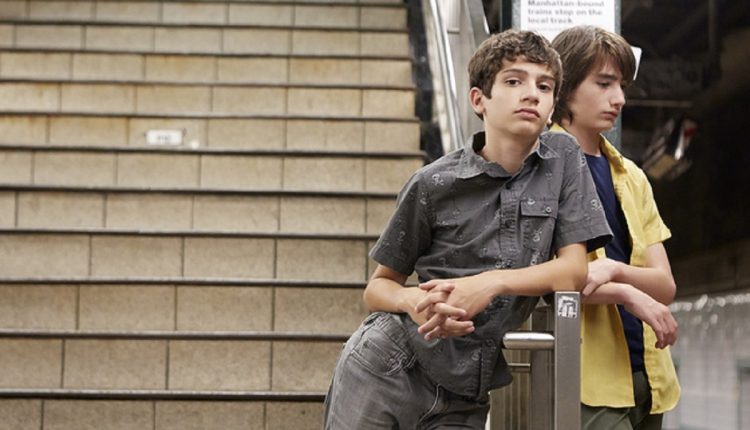 When his grandfather passes away, young Jake Jardine (Theo Taplitz) has to move with his parents (Greg Kinnear and Jennifer Ehle) into the apartment that they have inherited. That apartment is above a shop, being rented by a woman (Paulina Garcia) who also has a young son of her own (Tony, played by Michael Barbieri). Jake and Tony quickly become firm best friends, which is all well and good while everyone is getting along. Unfortunately, the rent for the shop needs to go up or a new tenant is required. And that leads to some inevitable tension.

Directed by Ira Sachs, who co-wrote the screenplay with Mauricio Zacharias (continuing the successful working relationship that has resulted in some other movies before this one, including Love Is Strange), Little Men is a nice mix of the familiar and the ever-so-slightly different. It’s a cross between a coming of age movie and any film about divorce, with the main difference being that the “divorce” is actually a major potential split between people who have different ideas for a small business.

Garcia is very good, although her character is written in a way which is a bit less sympathetic than it could be, and Ehle and Kinnear also do well, with the latter particularly enjoyable in a role that doesn’t take him back to that oft-visited well of him being an arrogant ass. But this is a film about the two young boys, which means that Taplitz and Barbieri both need to do good work. Thankfully, they do. The two boys feel very natural in their interactions with one another, and their problems never feel major, but still feel major to them (which is how everything feels at that age). There are some other people doing fine work here, including Alfred Molina in a very small role, and they’re generally all well served by the script.

I’ve spoken about friendship and the hardships that kids endure when adults end up falling out, but Little Men is also about art and the pursuit of something that you love. As Kinnear puts it in one enjoyable speech to his onscreen son, you have to know when to put the hard work in and when to ease off slightly and save yourself from burning out. It may not be the focus of the film, or so it would seem, but it’s an interesting strand that twists around the other material to form an interesting storyline double helix. Sort of. Just watch it anyway, and then you can tell me if I am right or wrong.