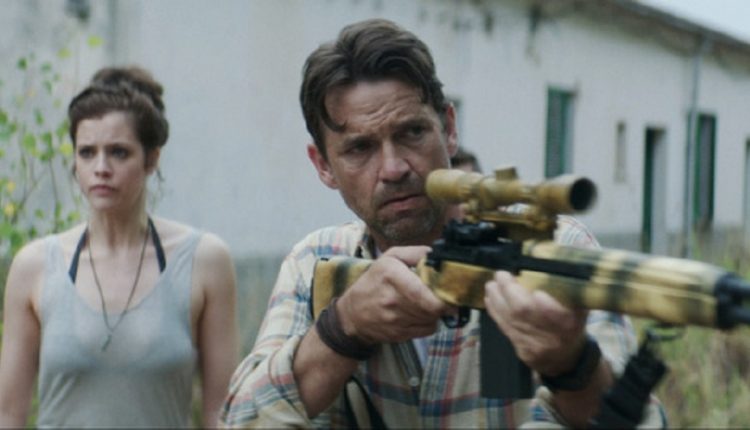 Described as The Walking Dead meets Westworld in some corners (some were even brave enough to replace Westworld with Jurassic Park), The Rezort doesn’t quite live up to that description, which may come as little surprise to most zombie movie fans. It is, overall, a fairly standard zombie film, a bit more sedate than most up until the third act, but takes on an extra interesting layer when viewed as a metaphor for the refugee crisis that has been occurring in certain European countries recently. And it looks like that was a deliberate move by writer Paul Gerstenberger to offer audiences a zombie movie with a more politically-charged message than most (well, more so than most recent releases . . . . . . it’s been too long since the intelligence of Romero was a regular factor in this subgenre).

The cast includes Dougray Scott, Jessica De Gouw, Martin McCann, Jassa Ahluwalia, Elen Rhys, and Claire Goose. Unfortunately, only a few of them really stand out. But that isn’t the worst thing, what with the plot being more concerned with the idea of a zombie safari experience and how that works in metaphorical terms, obvious at some points while subtle and unspoken for most of the runtime.

Director Steve Barker (who gave horror fans the first couple of Outpost movies) handles everything competently enough. The special effects are quite good, the premise and rules are communicated to viewers, and the moments of zombie action are okay. But that says it all right there, really. Competent, quite good, okay. I can’t really fake excitement for something that just plods along in between the livelier scenes. Although this movie has a few issues, it’s the pacing that ultimately proves to be the worst of them. This is a film that some people will give up on long before that third act starts to provide some much-needed energy and tension.

I feel bad for criticising something that at least attempted to try something a bit more interesting than every cheap bit of slap-dash entertainment put out by various horror companies every month. It’s just my opinion that zombie movies should be entertaining, first and foremost, thought-provoking, if possible, and never dull. Nobody ever told Ulli Lommel that, of course, but he’s a hopeless case, by this point. Steve Barker, on the other hand, just needs to remember those pointers, pick himself up by the bootstraps, and do better with his next feature.