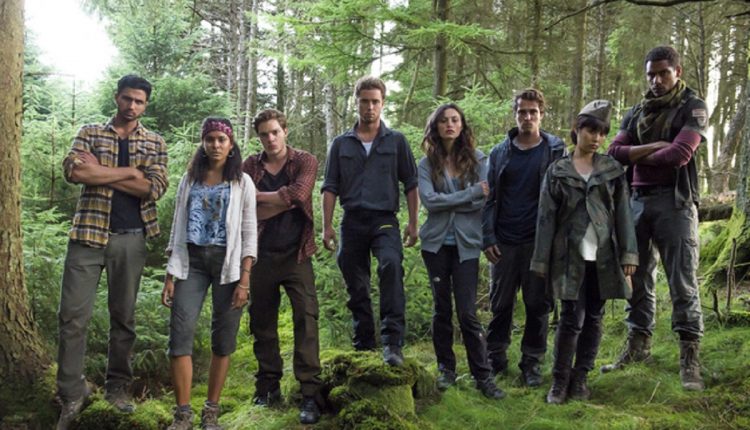 Jeremy Sumpter (who I haven’t seen onscreen since his starring role in Peter Pan, but maybe I’ve just missed his other movies) stars in this violent tale of spoilt kids against armed robbers. He plays Kyle Hartmann, a rich young man who has just avoided any major repercussions from a DUI incident thanks to a liberal use of money and influence by his father. But he’s used up all of his last chance, which is why he then has to be packed up and shipped off to a small island, where he will team up with others like himself and forced to think about the consequences of his decisions. The group also includes the girl who could have died in his drunken car crash (Amy, played by Phoebe Tonkin), which makes for some tension straight away. Things start to look up for the entire group when they grow stronger and closer during some team-building outdoor activities, but they soon take a turn for the worse when armed criminals arrive to capture them and hold them for ransom.

With a cast that also includes Ed Westwick, Ashley Walters, and Sebastian Koch, Take Down certainly isn’t a cheap ‘n’ cheerful film needing to stretch a tiny budget. It’s no blockbuster, obviously, but it’s a polished and well put together slice of entertainment. The cinematography shows off the remote vistas, the stuntwork is impressive, and the production values maintain a consistent level of quality throughout.

Writer Alexander Ignon does what is required for all of the main characters, even if he doesn’t actually make viewers care for them, and he puts all of the pieces in place for a fun second half. Most of the main plot devices are heavily signposted, which isn’t too bad when it leads to a decent dollop of excitement and gory violence. And it IS gory. Director Jim Gillespie doesn’t shy away from showing fatal bullet wounds, nasty cuts, and broken bones, all created with some realistic FX work that will have you wincing.

With a few scenes trimmed down (most of the material featuring stressed parents could easily be left on the cutting room floor), and some more effort to make the characters even slightly appealling, this could have been an excellent action thriller, for those with strong stomachs. As it stands, unfortunately, we have a film that only just manages to rise above average.