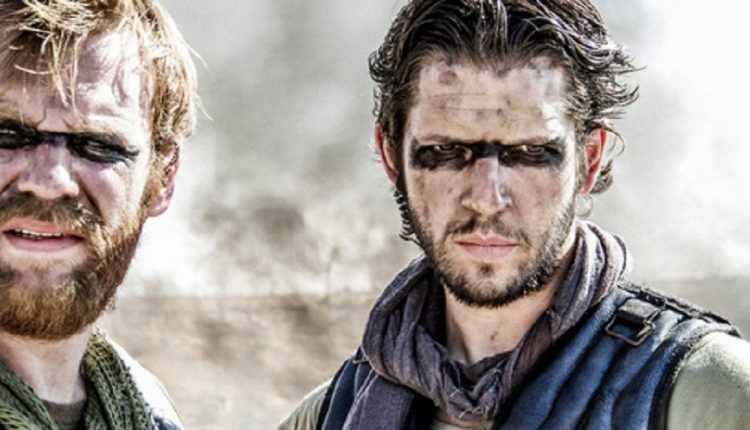 Two men on their way to complete a job, something that viewers can surmise will involve some nasty business. There’s small talk, there’s bickering, and there’s a lack of certainty when it comes to matters of loyalty. And one of those men is played by a Mr. Gleeson. If it seems that director Simon Dixon might be a fan of the McDonagh brothers then that’s probably only a coincidence, considering that Tiger Raid is based on a stage play (Radio Luxembourg) by Mick Donnellan. But that won’t stop you thinking about it while watching the film play out.

The Mr. Gleeson here, however, is Brian (brother of Domnhall and son of, yes, Brendan). He’s riding through the desert alongside Damian Molony, because the two of them are mercenaries working for an unseen boss who has a memorable job lined up for them. Is it a straightforward one though, or will one of the two men be tested? Because the boss is known for his extreme methods of testing loyalty. And will they make it to their mission location without wanting to beat the tar out of one another?

A two-hander for the most part, there’s no denying that the performances from Gleeson and Molony are both excellent. The first half of the film has some great interactions between the two, despite the viewer not knowing what to take as truth and what may be bluster and bravado. It’s in the second half when things really start to fall apart, right about the time that Sofia Boutella appears. She does just fine with a performance that doesn’t ask too much of her, but her appearance begins a battle of wills between the two men that is realised onscreen in a tediously repetitive cycle of arguments about kill commands.

Dixon does okay, I guess, when it comes to the directorial duties. It’s just a shame that he couldn’t have used his role in the script development, alongside Donnellan and Gareth Coulam Evans, to make the experience more rewarding for audiences. Instead, any goodwill built up in the opening third act is left to stagnate, and then rot away, as the film moves in ever decreasing circles towards a finale that it’s very difficult to care about.

I will give Dixon another chance to impress me with his next directorial effort, although I hope he steps further away from the stage next time, but at least this has brought Brian Gleeson and Damian Molony to my attention, two actors I will certainly look out for in the future.