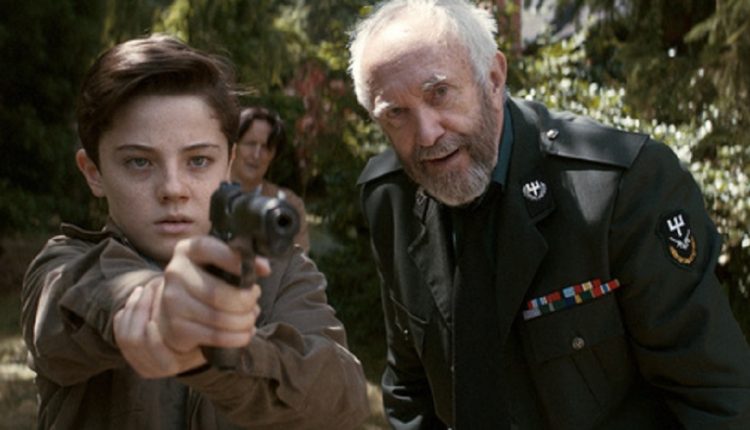 Lorenzo Allchurch plays Djata, a young boy who starts to find it harder and harder to live his life without feeling the effects of the dictatorship he is living under. It all gets a lot worse when his father is taken away in the opening scenes of the movie, after a decent animated opening credits sequence that briefly shows what this country has gone through to get to what it now is, leaving Djata and his mother (Hanna, played by Agyness Deyn) to fend for themselves. And that’s far from simple when they have been earmarked as the family of a traitor, despite the good standing of Djata’s grandparents (played by Jonathan Pryce and Fiona Shaw). Will mother and son manage to fight through their darkest days to get back to some kind of normalcy, or will they be crushed underfoot by the oppressive regime that fears their insubordination.

Written and directed by Alex Helfrecht and Jorg Tittel, with the two sharing credit equally, The White King is a bit of a misfire that still manages a few decent moments here and there, despite the many obvious mistakes. Technically, it’s hard to fault. The camera keeps pointing in the right direction and the dialogue is clear and audible. There even seems to be some effective CGI, although it is used relatively sparingly. And the performances from the four main stars mentioned above are perfectly fine, with Allchurch asserting himself as one to watch out for in future. I was also looking forward to seeing Greta Scacchi onscreen again, but it has to be said that her character is one of many victims of the clumsy script, thus having the knock-on effect of making her performance quite a poor one.

Yes, having mulled things over a bit more, the main problem, that the film can’t overcome, is the script. The dialogue isn’t terrible, by any means, but there’s no real sense of context, despite that opening sequence. Viewers are left without any details that might enrich the viewing experience, which wouldn’t be so bad if there weren’t numerous unnecessary scenes that seem to serve no purpose other than to pad out the brisk runtime. A feud with some older twins, for example, doesn’t really move anything along, and just serves up some strangely flippant violence without any consequences for anyone involved. And there’s a moment that shows Deyn’s character being denied custom at a local shop, which again doesn’t seem to do anything beyond that one scene. Nothing connects as well as it should, from the plotting to the set-pieces to the true lessons to be gleaned from the film.

In future, if I want to see a film about a kid being resolute in the face of oppressive rulers, I think I’ll just stick with the likes of The Hunger Games or Divergent. At least those do what they set out to do.