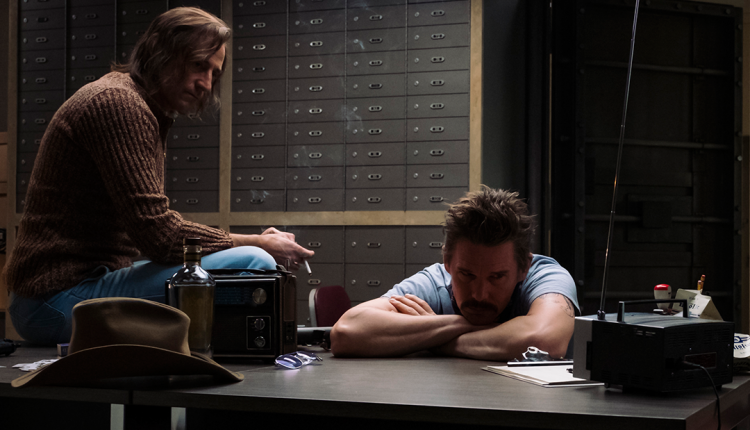 Will Ethan Hawke’s charismatic performance as The Captor captivate audiences in this dramatisation of the original case of Stockholm Syndrome?

Stockholm Syndrome is a phrase used ad nauseam to describe a plot device where a female character falls in love with her captor. It is also name checked in classic cinematic hostage situations including Die Hard and Dog Day Afternoon.

Yet so far, Hollywood seems to have resisted adapting this true crime story for the big screen. Perhaps due to the definitive and iconic performance from Pacino screaming “Attica! Attica!”.

Writer-director Robert Budreau wisely steps out of the shadow of Dog Day by playing up the “absurd but true story” aspect of this tale of a Swedish criminal who held hostage a number of people in a Stockholm bank for 6 days in 1973.

Being able to captivate, pardon the pun, manipulate and control the audience (as well as the hostages) needs a certain type of screen presence. Budreau finds the perfect conduit in Ethan Hawke, who he directed as Chet Baker in Born To Be Blue.

Hawke is clearly having a ball as Lars Nystrom, leaning heavily into the over-the-top theatrics in his interactions with police. Conversely, when he is with the hostages, he is empathetic and vulnerable. As evidenced in his tender chemistry with Noomi Rapace’s bank clerk who will hold the key to everyone’s survival.

Best known for his dramatic roles in the Before trilogy and First Reformed, Hawke also delivers gravitas and credibility to genre pieces like Sinister and The Captor.

Adapted from the original 1974 article The Bank Drama in The New Yorker, the action is condensed from six days to two. However it still contains all of the incredible WTF moments that occurred over the duration of the siege. One example is Nystrom persuading a hostage to wear a bulletproof vest and shoot them to convince the police he is serious.

It is a difficult task to produce an original twist on the genre. Which is ironic given this is the story that inspired it all. However Budreau uses the staging to create an effective sense of claustrophobia and builds the bond between captor and hostage.

The film is over in 92 minutes but Hawke is on such charismatic form you’ll wish you were locked up for longer with The Captor.

The Captor is on limited cinematic release and available on VOD.