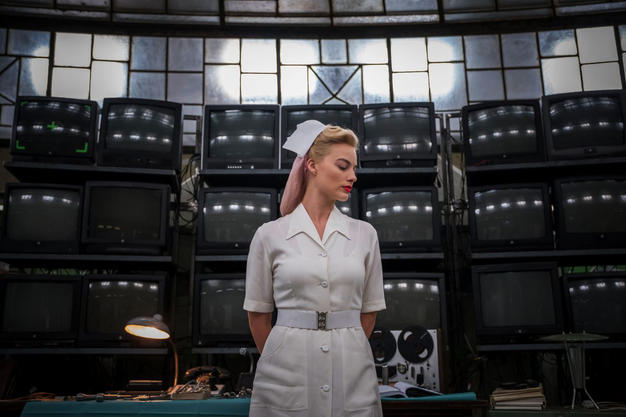 The majority of the action in Vaughn Stein’s neo-noir debut Terminal takes place in an eerily quiet train station with a cafe called The End of the Line.

An apt setting for the film’s characters who are all experiencing a case of finality. Dexter Fletcher and Max Irons are a pair of assassins whose partnership is fraying at the edges. Simon Pegg is a woeful English teacher with a terminal illness and Mike Myers is the station guard working a dead-end job.

The only thing connecting them all is the waitress at the cafe, Annie (Margot Robbie) – a potential femme fatale with a past even more mysterious than their own.

Margot Robbie cements her Hollywood A-List status with a magnetic performance that oozes so much star power, she shines brighter than the neon signs that adorn the buildings.

With interconnecting stories linked by an alluring female, it is easy to draw comparisons to Sin City. Unfortunately the end result is less Las Vegas and more Blackpool.

Like the best Vegas shows, the production design is impressive and writer-director Vaughn’s first feature certainly contains some striking imagery.

The script however finds itself lacking. There are interesting moments in the interactions between Robbie and Pegg’s characters as they discuss the futility of life and ways to end it all. However, the rest of the dialogue feels recycled from a Guy Ritchie gangster film in the late Nineties.

It also suffers from serious pacing issues. Even though it has a runtime of just 90 minutes, it feels longer than a delayed Southern Rail service from Victoria to Brighton.

Terminal is fuelled by Robbie’s central performance but even that can’t stop it going completely off the rails as it reaches its final destination.