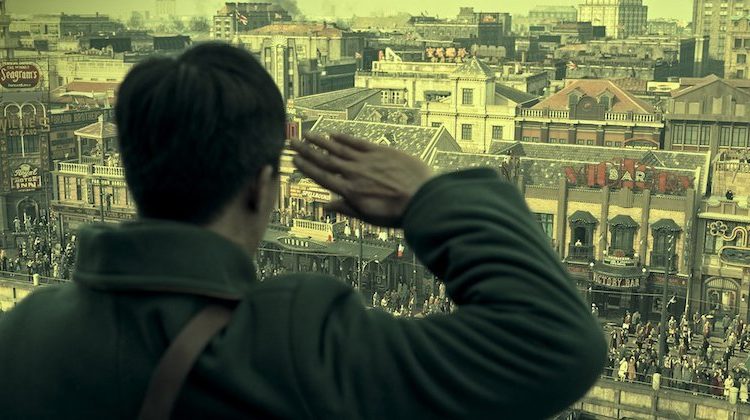 In 1937, the drastically reduced 88th Division of the Chinese Nationalist Army was stationed in a warehouse in Shanghai against Imperial Japanese soldiers. Known as the Defense of Sihang Warehouse, it became a prominent part of the Second Sino-Japanese War. Despite comprising less than 500 officers and soldiers, the number of troops was exaggerated in the media to conceal the real number from the Japanese – creating the legend of the Eight Hundred Heroes.

Directed by Guan Hu, the release of The Eight Hundred was delayed by almost a year due to the COVID-19 pandemic. However, China’s success in containing the virus allowed cinemas to reopen to the public, as well as enable the film to be released in April 2020. Filmed with an $80m budget, it grossed over $470m at the box office to eventually become the highest-grossing film of last year.

From the get-go, The Eight Hundred establishes a frenetic tone. Any surviving Chinese forces come across as under-equipped and overwhelmed by the more forceful Japanese troops. Therefore, the former’s last stand is this one warehouse, which sits by Suzhou Creek that separates the combat area from Shanghai’s foreign concessions, so bystanders such as refugees and press from the Western world witness the battle in plain view.

Due to the number of soldiers in battle, the action jumps from one character to another so it is hard to form an empathetic connection with any of them. Some are reluctant to fight or driven by fear while others try and encourage others to embrace their fighting spirit. With a melee of emotions amid the combat, it is hard to keep track of individual character development. Therefore, we are left with the key selling point of The Eight Hundred, which is the battle itself.

Taking place over four days, the fight sees heavy losses on both sides but despite the aggressive attacks by the Japanese, the Chinese are able to withstand each wave with admirable resilience. While it provides a ‘show’ for most spectators across the creek, it is this courage that inspires some Shanghainese citizens to risk their lives to support them.

As most of the action takes place in Sihang Warehouse, the explosive action is contained in one closed-off area. Thanks to Cao Yu’s glossy cinematography, the combat scenes are brilliantly shot and intricately directed, flowing with an impressive sense of consistency. There are a handful of moments to allow quiet reflection – one notably being soldiers entranced by an opera singer across the creek – but it doesn’t take long before the fighting starts again.

Overall, Hu ultimately delivers a stylised, epic piece of filmmaking but The Eight Hundred doesn’t stray far from the historical event it is based on, so there is little else to enjoy besides the gunfire.