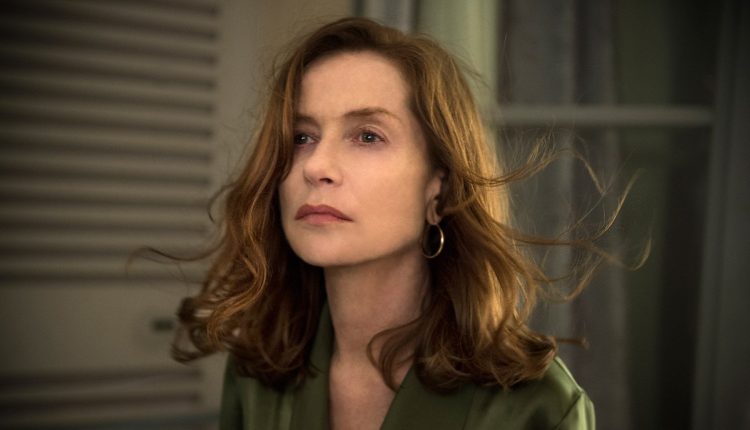 It is a uniquely disorienting and confusing pleasure to watch Isabelle’s two latest movies – Mia Hansen-Løve’s Things to Come/L’Avenir and Paul Verhoeven’s Elle – one after another, as I just did in New York. Both were playing in the city’s premier annual cinematic event, the New York Film Festival. Some young journos who slogged through them with me joked that if neither one quite was a great film, a mashup of the two might be a zinger. Actually either one of them is a zinger by itself. Isabelle Huppert is simply an amazing actress, the most prolific and quite possibly the most brilliant in movies today.

In the first, Huppert plays Nathalie, a Paris university “philo” prof, who’s more or less an ordinary human being, though exceptional in her aplomb in the face of hard knocks. She is dumped by her academic publisher and her longtime husband; left in the lurch by her handsome favourite student; faced with her mother’s dramatic ageing and death, her daughter’s leaving the nest, becoming a grandmother, and rescuing a cat.

In the second, Verhoeven’s Elle, Huppert plays Michèle Leblanc, the owner-manager of a successful video game company with a very, very strange past and an equally weird present. She’s not really remotely a normal human. She’s an Isabelle Huppert superwoman-monster. This is a mystery, a comedy, and a horror movie. It also confusingly meshes with the previous film. Here too she becomes a grandmother, must contend with a trying aging mother. And in both there is a cat, and the Huppert protagonist weathers a series of literally very hard knocks with, well, this time, super-human aplomb.

Verhoeven hasn’t made a movie for a decade and this is his first made in France. It happened because Huppert latched onto the project before Verhoeven did, and Hollywood rejected it, after American David Birke had adapted Philippe Djian’s French novel for the screen. The rejection, Verhoeven has explained, was because in Hollywood, if a woman gets raped and pursues the rapist, there’s got to be revenge. But there was no revenge in the book, or Birke’s screenplay. Instead, the raped lady, a successful businesswoman of unsinkable froideur, gets involved in a tricky game of cat and mouse with the rapist. The “mystery” soon ends, though, as she discovers the rapist (Laurent Lafitte) close at hand – but does nothing to have him apprehended.

Michèle Leblanc gets raped in the first frames, by a tall masked man in black (we’ll revisit this scene again, and again). They fight, violent blows are exchanged, a table full of china crashes onto the floor of Michèle’s suburban mansion. Violent intercourse occurs, with panting and yelling. The masked man flees. Michèle then gets herself up, and sweeps away the mess. She tells her boyfriend the big bruise on her face is from a fall off her bike. She goes about her business. It’s only later she tells friends and family she was assaulted. She does not tell the police. This is because she does not like police, for reasons we learn later.

Elle seems trashy, but Verhoeven’s movies always do, even at their best, and this time it’s trash with an elegant French gloss. The mixture of violence and blood and murder in a bourgeois French setting reminded me of Chabrol; and, of course, Huppert worked for Chabrol – six times. Even Chabrol would probably not have filmed a story with trappings as lurid as these. Michèle’s mother (Judith Magre) is a disgusting old crone, her face a bumpy mélange of crude cosmetic surgeries and with the occasional “petit botox.” She has a paid muscular young lover called Ralf (Raphaël Lenglet). Michèle’s father is in prison for life for a series of lurid murders when Michèle was a girl – and may have participated.

The video games Michèle’s company makes are lurid, sexual, and violent too, and the company is mostly cocky young men, who mock her. There is a version of the latest game mocked up to amuse the team in which Michèle is sodomized by a tentacled digital monster. There are other subplots. Michèle has a lover (Christian Berkel), who is the husband of her best friend (Anne Consigny), and her ex-husband (Charles Berling) is still in the picture. She has a strapping young doofus of a son called Vincent (Jonas Bloquet), who’s expecting to have a baby with his girlfriend, Rebecca (Virginie Efira), who’s crazy; the baby clearly is not his, and the father is black. Yet Michèle considers herself a grandmother. Her parents do not fare well. The protagonist masturbates watching her rapist, and a Christmas crèche; religion provides more than one form of conciliation. Some of this stuff would get in the way of a Chabrol plot, but it’s all grist to Verhoeven’s energetic gin mill.

Half the pleasure of Elle is seeing Huppert sail through the turbulent, convoluted action. Michèle Leblanc was a character she had to play. Elle has an excellent cast with plenty of depth, but it is Huppert who makes it work. She is indestructible. We don’t really know who Michèle Leblanc is or what makes her tick, but with Huppert, it can happen. This movie is another expansion of the repertoire of the inexhaustible actress, and as noted in a NY Times article, writers “have noted that Elle includes sly references to her formidable filmography, including Michael Haneke’s The Piano Teacher (2002); Christophe Honoré’s My Mother (2004), a story of incest; and Claude Chabrol’s Madame Bovary (1991).”

No doubt Huppert has been through many vicissitudes on film, but Elle reminded me of Catherine Breillat’s bravely honest autobiographical film, Abuse of Weakness, in which Huppert also starred, and was brilliant and convincing. It depicts how Breillat had a stroke, and the disreputable man who became her “helper” took over her life, and her bank account, wiping her out financially. Here too, the Huppert character is Teflon-coated, knocked down, but unbowed. That was real life. Elle is ghastly fun.

Elle, 130 mins., debuted at Cannes in Competition May 2016 and was nominated for the Palme d’Or; 20 other festivals, including New York, where it was screened for this review 14 Oct. 2016. Released in UK cinemas 10th March.