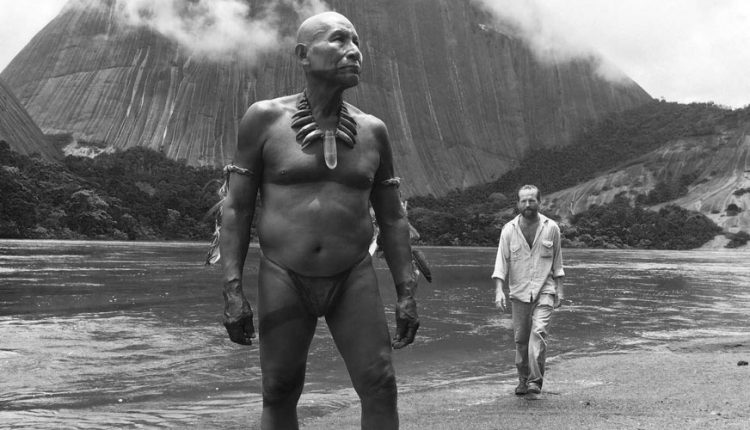 It’s hard to behold delusional Europeans flailing in the depths of the Amazon without Werner Herzog coming to mind, and so he does in Embrace The Serpent, an impressionistic meditation on the clash of modernity with biology. A dash of Coppola made it into the mix too, as it must for any film which ventures up a tropical river in search of mystical power.

Shot in a monochrome so vivid there are times – including the opening frame – in which it is hard to believe it isn’t colour – the cinematography alone is worth the price of admission. Which may be just as well, because it is hard to know what else, beyond platitudes about how the enlightenment has spoilt everything, to make of it.

Unlike Herzog and Coppola, director Ciro Guerra describes the narrative from the locals’ perspective, although the fellow he chooses is a bit of an outsider himself.

Our protagonist is Karamakate, an Amazonian tribesman. He makes two voyages up the “serpent”: the first, in his youth, is a desperate quest to find a mythical herbal cure for a dying European botanist, the second, as disillusioned old man, is to accompany another botanist to find the tree and complete the earlier man’s mission.

The stories mirror and counterpoint each other, splicing together in visually clever but narratively baffling sequences. As both journeys follow the same course it is often hard to know which one you’re in. We meet catholic missionaries, rubber barons and local villagers trying their best to survive them: Karamakate is dismissive of all of them. Their coping strategies differ depending on the points in the arc of decay these Caucasian contrivances describe. The decline and fall of any civilisation is unedifying, and of course the innocents tend to bear the brunt of it. So it is here.

Meanwhile, the botanists are slowly persuaded to abandon their European baggage – literally – and accept that the relief they seek transcends the biological and the bodily.

Embrace the Serpent works best as a series of tableaux, some of which are stunning. Karamakate is an ornery character even to his own people, but neither he nor his European charges are the real gravitational spindle of this film. The serpent is. The final third sees a jarring but meaningless psychedelic sequence owing as much to Kubrick as anything else, and a rather overwrought ending which felt like a ten-ton weight. Mind you, it’s hard to see how you could end such a meditative film short of marauding Rhesus monkeys or a star-child.