Helmed by Mark Gill (The Voorman Problem) and co-written with feature-first-timer William Thacker, England is Mine covers the years before The Smiths rose to become arguably the most influential British guitar band ever. Ok, at least Top 5.

Singer and lyricist Morrissey is the antithesis of the “live fast, die young” rock star cliche: he’s more of an “eat Digestive, get indigestion” kind of pop star: sometime celibate, voraciously vegan, and wholly anti-media. So if you’re expecting a tale of sex, drugs and rock n’ roll, you’ll be left jonesing.

The concept of a biopic on the early years of Morrissey must have been a hard sell; besides the music, the most interesting story of Morrissey and The Smiths is their public implosion, band firings and bitter court battles over unpaid royalties. However, here we’re treated to a young Steven Patrick Morrissey, desperate for fame but held back by his own mild-mannered demons.

Apart from his celebrity (and increasingly worrying right-wing views) the idea of an interesting Morrissey film, as he’d almost certainly agree, is oxymoronic. His struggle to get up on stage, into a conversation or even out of bed are admirably authentic, but ultimately. they’re the film’s downfall. Nothing really happens. Yes, this is indicative of the plight of the working class in late 70’s Manchester, but this authenticity is not enough to keep the viewer engaged. 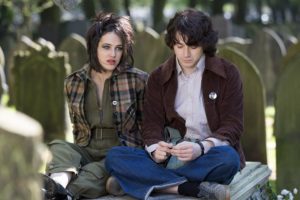 What does keep the audience engage though is the cast. Jack Lowden (Dunkirk) turns in a nuanced performance, personifying all the peculiarities that make Morrissey such a divisive figure. He skillfully avoids cliched impersonation so that by the time he opens his door to future bandmate Johnny Marr, his uncanny transformation is complete and this author did a double take.  Alongside him, Jessica Brown Findlay of Downton Abbey fame is well realised as Morrissey’s mentor/muse/BFF Linder Sterling: a role which may have been little more than a sidekick in a lesser actor’s hands.

Poignant scenes of Morrissey wandering the train tracks are beautifully rendered and there are flashes of dizzy inspiration after he gets a good kicking at the last night of the fair. This aside, there’s little more for the casual fan to invest in. The lack of any material by The Smiths makes perfect narrative sense, but seems like cutting your nose off to spite your face, missing the opportunity to give the less-initiated a lightbulb moment.

Having said that, the fairground scene evokes the song ‘Rusholme Ruffians’, whilst the characters trading quotes at the cemetery, a darkened underpass and the flatulent pain-in-the-ass boss will all feel like Easter Eggs to any fan of The Smiths. Sadly though, that isn’t enough.

More than 2.5 stars? You Just Haven’t Earned It Yet Baby.