When Evening Falls on Bucharest or Metabolism (2013)

A filmmaker looks at himself, in 11-minute segments

Corneliu Porumboiu, the Romanian director of Police, Adjective (NYFF 2009), takes aim at more sophisticated, universal material with this sustained foray into the self-referential, post-modern cinema of exhausted ideas. When Evening Falls on Bucharest or Metabolism is a formalised, ironic look at the filmmaking process centred around a worldly, egocentric, neurotic, urban director apparently as interested in seducing actresses as in making good films. But he may make quite good films. That’s just not what we get to see him doing. 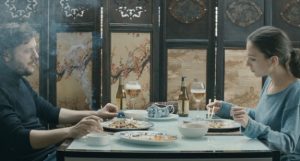 This instead is a series of clearly defined one-reel film segments that dryly look at a working movie director during off hours. He flirts with, plays with, dines with, discusses with, off-screen has sex with, his actress and talks about the screenplay and his stomach problems. The film ends with a look at an endoscopy, ostensibly the director’s. A metaphor, perhaps, for what he has been doing here, though the interior or personal world of the director examined is of a very abstracted, formalised, trivialised sort.

The film opens in a car, dark outside. Two people talking, the director and a woman. He explains to her differences between digital and film. He says he is used to organising his work into the eleven minutes of a single reel of film and therefore can’t shoot in digital format, because it runs longer, and he’d lose the run-time shooting structure he’s familiar with working in. So then each successive segment of the film we are watching, shot on film, is so organised, into a total of eight segments, eight reels, eighty-nine minutes. The result for the viewer is a sense of a formal task duly executed. Porumboiu defines the limits of the medium as he practices in it and, perhaps, in so doing transcends them.

Thus the Romanians, who dealt with failed revolution, police corruption, petty crime, illegal abortions, adultery and criminal families, move on, in Porumboiu’s case, anyway, with When Evening Falls on Bucharest or Metabolism to elegant conceptual navel-gazing. But we should note that this isn’t a wholly new direction for Porumboiu. Even in Police, Adjective he wound up with an aria about the tyranny and triumph of language. But this time we are treated to a consideration of whether and how chopsticks have altered the nature of Chinese cuisine, versus knife and fork for the Europeans, and eating with their hands, for the “Arabs” [sic].

But this time Porumboiu’s effort may be taken as priggishly tidy, as accomplished at the cost of lifelessness. As Jay Weissberg says in his Variety reiiew, “Corneliu Porumboiu’s latest drama is so carefully intellectualised that the picture has no room to breathe.” it’s ironic that he introduces references to Monica Vitti and Antonioni, neither of whom, depressingly enough, his young actress has even heard of. If L’Avventura is Porumboiu’s model, he has fallen fall short of it. The “sick soul of Europe” has been reduced to Euclidian geometry. Corumboiu has mentioned Hong Sang-soo, but the Korean film directors bumbling around in search of women and getting drunk in bars, are good old boys compared to this self-conscious fellow, who never quite seems to enter even a cinematic “real world.” 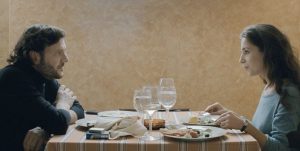 When Evening Falls on Bucharest or Metabolism/Când se lasa seara peste Bucuresti sau metabolism debuted at Locarno, and was screened for this review as part of the Main Slate of the New York Film Festival at Lincoln Center, September 2013.