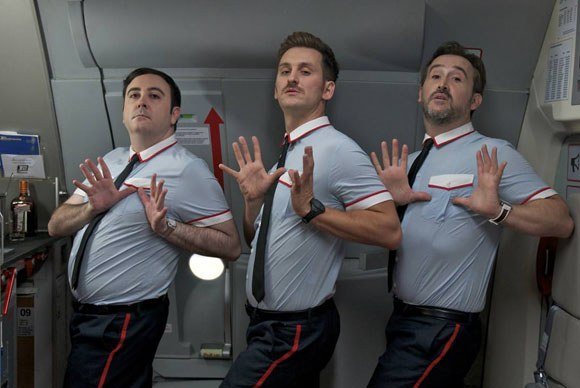 It has been two years since renowned Spanish filmmaker Pedro Almodóvar released his physiological horror The Skin I Live In, which established a dramatic change of direction in his extensive filmography. However, the same can be said for his latest film, I’m So Excited (original language: Los Amantes Pasajeros), which is a straight-up no-holds-barred comedy.

Set in the business class section of an airplane, the crew and passengers, formed by an ensemble cast of Almodóvar alumni, including Cecilia Roth (All About My Mother), Javier Cámera (Talk to Her) and Lola Dueñas (Volver), face possible death due to a malfunction mid-flight. Secrets, sexual abandon and lip-synching ensues.

I’m So Excited is a strange combination; it has certain serious plot elements such as the malfunction, a passing mention on Spain’s economic troubles and the delicate mental status of a scorned lover. Yet, it also encompasses Almodóvar’s trademark themes, such as crazy lovers, death and sexual undertones – all these factors, unfortunately, clash in a way that the underlying garishness of the crazy takes all the would-be emotional drama out of the film. The result is 90 minutes of almost over-exaggerated melodrama, lessening the impact of the seriousness of the situation.

In the past, Almodóvar’s features have a certain degree of class when flaunting the outrageous, but in I’m So Excited, he is not watering it down for the sake of the viewer. Upon seeing the colourful credit sequence, it is obvious that the film screams camp and this peaks during an impressive, memorably choreographed performance by the three male flight attendants, who perform The Pointer Sister’s eponymous hit for their passengers’ (presumed) entertainment.

Having said that, this is undeniably Almodóvar’s wittiest film; his rarely seen comedic talents come through in the sharp banter between the unscrupulous characters, who talk so freely about their sex lives. It’s all so scandalous that it is easy to feel entertained by the escapism of the on-flight gossip.

It may not be artistically stylish to accommodate fans of Almodóvar’s more acclaimed films, but the amoral characters and the quick-witted dialogue are enough to shock and entertain.

I’m So Excited is out in nationwide cinemas on Friday 3rd May.