The perils of childhood can easily make or break someone’s life, especially as he or she venture into the scary world of full-time education.  The latest film by director Amr Salama was surprise success in the Egyptian box office and brings the classic ‘fish out of water’ tale with an innocently whimsical twist.

Excuse My French follows the story of young Egyptian boy Hany (Ahmed Dash), who is brought up as a Christian.  When his financially successful father unexpectedly dies, he is forced to leave his private school for a public Muslim school.  Not wanting to be bullied, Hany pretends to be Muslim while struggling to fit in with the chaotic, unfamiliar environment. 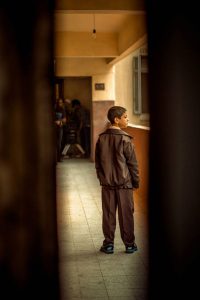 On the face of it, it is a very simple coming-of-age tale.  A young boy in a new environment, coping with bullies, friendships and parental issues.  Unfortunately, this is all too familiar, bordering on cliché.  With that in mind, the film doesn’t do enough to provide a different perspective on an already established style of narrative.  In addition to this, Hany’s constant efforts to be accepted by his peers are repetitive and it is easy to lose track of his motivations, despite Dash’s innocent yet unflinching performance.

On the flip side, what shines in Excuse My French is the conflict between Hany’s established Christianity and the Muslim principles of his new school.  It took five years for Salama to produce the film due to the sensitive opinions of the two religions in Egypt, but the story shows respect and care to both without favouring one over the other.  The script is sharp enough to keep viewers entertained and Salama makes the most of adopting the innocent perspective of Hany in his filmmaking, providing a simplistic yet whimsical visual style.

Overall, Excuse My French offers to put a fresh perspective in the guise of a crowd-pleasing comedy and its young star Dash, but it fails to makes the grade.